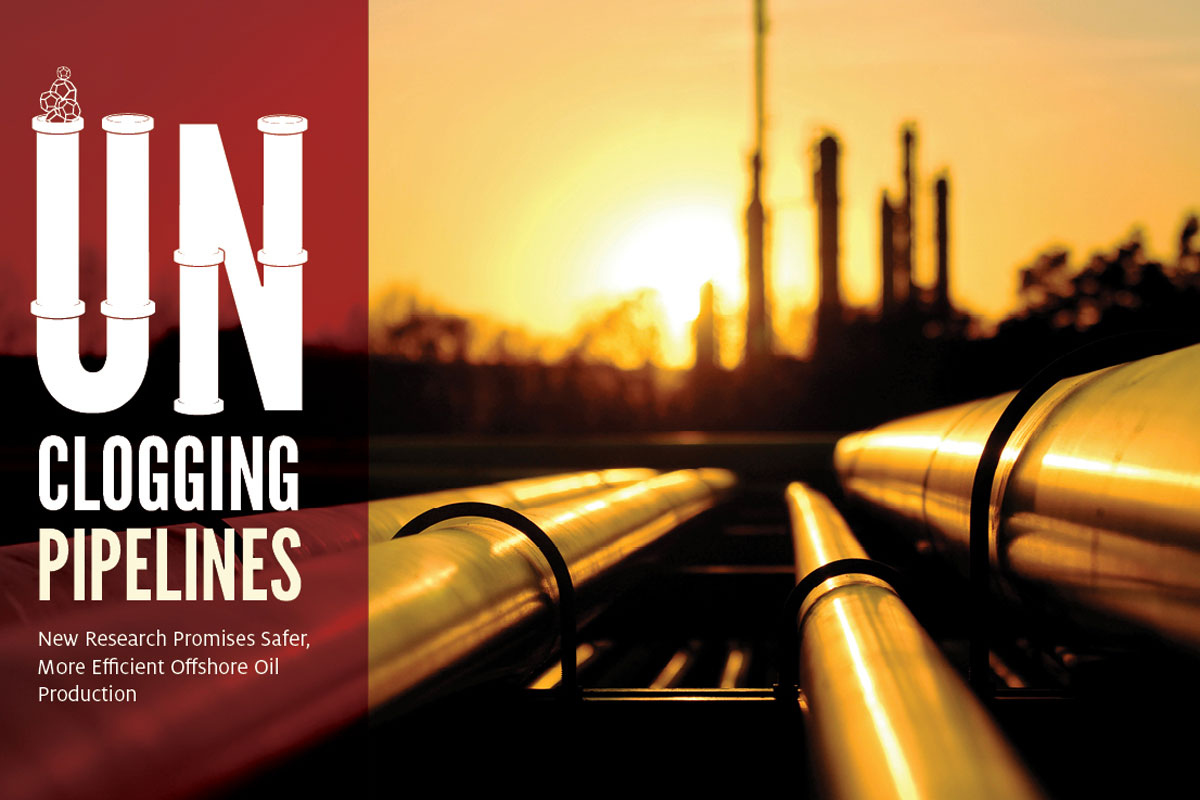 World-renowned for their anti-icing materials and research, UH engineer Hadi Ghasemi and his research group are applying their expertise to a new subject — gas hydrates.

“One of the important aspects of our research that we’re working on as a group is surface physics,” Ghasemi said. “We’re trying to develop innovative and transformational surfaces to address problems in different industries.” This led his team to consider issues facing offshore oil and gas production.

Natural gas hydrates are ice-like crystalline solid structures that are formed when water and gas come together at high pressure and low temperature. Gas, most often methane, is trapped inside these compounds making them highly flammable and potentially hazardous.

“When you have high pressure and low temperature in the underwater pipelines used in offshore petroleum extraction, it forms gas hydrates. They accumulate, and after a while they block the pipeline,” he said. “Eventually, it may cause the pipeline to shut down or could cause it to blow up. It’s a big problem.”

In the 2010 Deepwater Horizon situation, gas hydrates were a major issue in the containment of the oil leak following the blowout of the Macondo well in the Gulf of Mexico.

Despite their negative impact in oil and gas pipelines, gas hydrates are a potential asset when present in large natural gas deposits in arctic regions or in oceanic sediments along the continental margins, Ghasemi added. The global estimate of the amount of energy (methane gas) in natural gas hydrate deposits is approximately twice that of all fossil fuel reserves available worldwide. This makes gas hydrates attractive fuel sources.

The current strategy in the petroleum industry is to inject huge amounts of ethanol into pipelines at the first sign of hydrates to dissolve the solids and prevent them from forming again. But ethanol is pricey, making this solution economically unfeasible.

Ghasemi’s group is aiming to come up with a cost-efficient solution.

The research project has three main objectives: 1) developing new approaches to accurately predict the growth rate of gas hydrates, 2) looking at the nanoscale physics of the gas hydrates to pinpoint ways to inhibit the growth of the hydrates, and 3) creating new surfaces that are hydrate-repellant to avoid any attachment.

The group has already developed a method to predict the growth rate of the hydrates and has used it in a few case studies.

“The fundamental knowledge that we’re going to gain in this project is going to help us avoid any catastrophe in the offshore pipelines and more importantly to use hydrates as an efficient material to address global energy problems,” Ghasemi said.

Natural gas hydrate reservoirs occur in the Arctic region, an area which happens to be of high interest to the National Science Foundation.

“There’s so much unexplored potential, so much knowledge that exists there and we don’t know anything about it,” Ghasemi said. “There is great interest in acquiring fundamental knowledge that we’re missing from the Arctic region.”

He is happy to contemplate the possibility of a future research trip to the Arctic. “There’s a lot of ice and gas hydrates there,” he said.