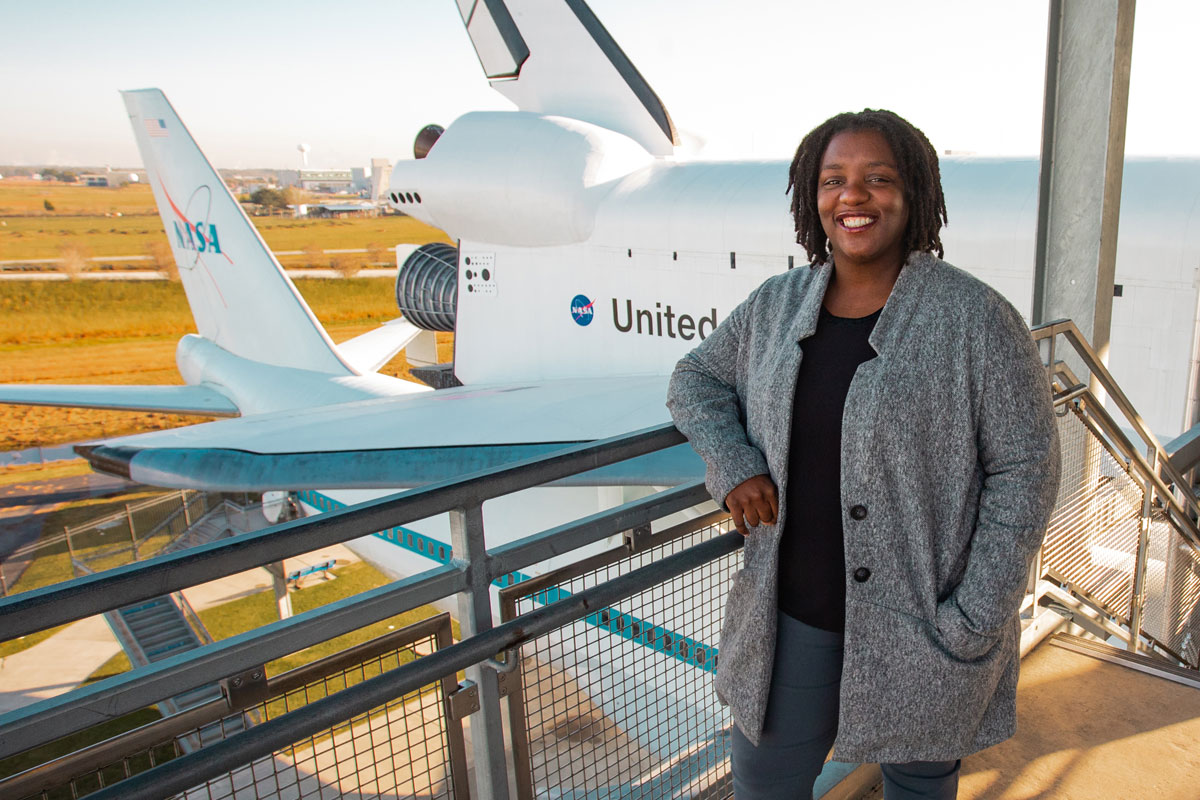 If you have seen photographs or videos of astronauts working on laptops while floating more than 200 miles above the earth aboard the International Space Station, you have caught a glimpse of the work done by UH Cullen College of Engineering alumna Mejean Cline.

As a Linux developer and configuration management analyst for NASA contractor Leidos Inc., she is part of a team located at the Johnson Space Center that programs and supports all of the computer systems on the Space Station. At 37, Cline is working at her dream job.

“I was a kid who always loved everything about NASA. I loved technology, I loved space,” she said. “NASA’s vision is: ‘We reach for new heights and reveal the unknown for the benefit of humankind.’ I have always been fascinated with the unknown and eager to learn everything I could.”

Her long journey to success, paved with challenges and hardship, is nothing short of inspiring. 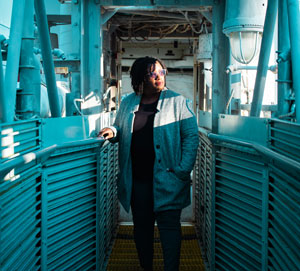 Originally from New Orleans, Cline graduated high school and joined the Orleans Parish Sheriff’s Office to help her family with finances. After moving to Houston in 2002, she worked at private security jobs. Through it all, she continued to hold onto her dream of working with computers, becoming an engineer and one day joining NASA.

“Law enforcement was basically how I fed my family. It was always something I could do, but I knew I didn’t want to do it forever,” she said. “I loved programming and any kind of geeky stuff.”

However, life took over and the dream to go to college and pursue her computer engineering degree kept getting postponed. Then she became a mother, giving birth to Elijah in 2004 and Naia in 2007.

“I didn’t really decide I could do it in earnest until I was a mom,” Cline said. “I always thought I would go to college, but I didn’t feel the hurry until I had them. I just had a moment where I was like, ‘What are you waiting for?’”

First, she earned an associate degree in science from Houston Community College. After that, she took a two-year break to raise her family and work. Finally in 2012, she started her bachelor’s program in computer engineering at the Cullen College.

She also joined the Program for Mastery in Engineering Studies (PROMES), a Cullen College program dedicated to increasing engineering students’ success in their studies, personal lives and careers. The PROMES staff told her about different scholarship opportunities, special tutorial sessions and more.

At one point Cline found herself overwhelmed by the daily juggle of raising two children, working full-time and going to school. Her grades started to suffer.

Cline’s husband Ray Roberts told her to focus on school and graduating. While the family would have to budget and be careful with money, it was feasible. Cline applied herself to her studies.

Eventually, her grades went up and she eased back into working part-time in the PROMES office. Two of Cline’s PROMES mentors told her about the William A. Brookshire Scholarship for students taking a full course load and working at least 20 hours a week.

Dr. William A. Brookshire, a UH chemical engineering alumnus, understood the unique challenges faced by students who work to pay for their educations. Raised without means himself, Brookshire worked full-time at a day job and attended night classes at UH to earn his bachelor’s degree in 1957.

In 1967, he and business partner James Slaughter Sr. founded S&B Engineers and Constructors Ltd. in Houston. Initially, the pair made up the entire company. Now it employs more than 4,500 people around the world and serves clients in the refining, petrochemical and chemical, midstream, infrastructure, power generation, pulp and paper industries.

A very generous man and a dedicated Cullen College supporter, Brookshire funded scholarships to help ease the financial burdens of working students. He also donated $1 million to the Cullen College to create the William A. Brookshire Teaching Excellence Award Endowment, whose annual distributed income honors Cullen College faculty “who demonstrate an unwavering commitment to exemplifying the highest levels of teaching excellence inside the classroom.”

Cline knew competition for the scholarships would be tough and wasn’t sure of her chances. But after much encouragement from her mentors, she applied for and was awarded a Brookshire Scholarship for the fall 2014 semester.

Life threw a curve ball that October when Cline’s husband lost his job. The family no longer could afford a car and had to rely on the bus system to get around. Roberts found a new job, but life continued to be hard.

“I used to ride the bus two hours one-way just to get my kids to school,” Cline recalled. “My husband worked [in west Houston] at that point. He would bring the kids home from school, then catch the bus back and spend the night in his office so he could be at work on time the next day.”

Then more disaster struck. Two weeks into this new routine, Cline was hit by a car. She had dropped the kids off at school and decided to grab a cup of coffee before heading to her own classes. A woman driving out of a parking lot did not see Cline in the crossing.

“I don’t remember much of the details. It felt like I was hit by a wall, then I just remember the ground coming up to my face,” she said, her words carefully measured because the experience is still difficult to share. “But the people who saw the accident said that I actually rolled up on her hood like in the movies. The impact knocked my glasses off, my shoes went flying.”

Cline ended up missing two weeks of class because of her injuries, and her husband left his job to take care of her. “I needed someone there to help me do everything,” she said. 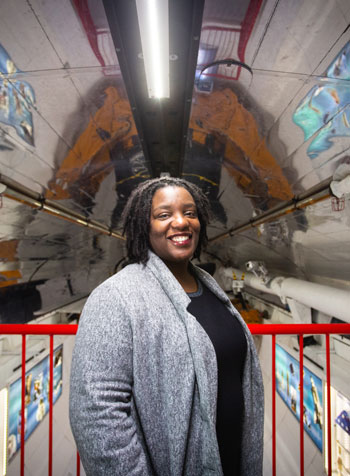 During this difficult time, finances spiraled out of control. Cline used her UH Meal Plan to feed her family. They couldn’t pay bills or rent. Electricity was cut off, and the family eventually had to move out of the apartment they’d called home for eight years.

“We hadn’t had electricity for a month by the time we moved into a homeless shelter,” she said. “We were fortunate enough to land in an awesome place, the Salvation Army Family Residence.”

Volunteers kept the young children busy with games, music and other activities.

“The kids remember that time very differently than I do because the [shelter staff and volunteers] kept them distracted,” Cline said. “I’m grateful for that.”

While still living at the shelter, Cline returned to her classes but continued to struggle, often having to choose between paying for food and bus fare. Her grades suffered and she found herself on academic probation and in debt.

“I was overwhelmed and failing,” Cline said. She ended up with an administrative withdrawal for the 2014 fall semester.

Then it was 2015, time to renew her scholarship.

A representative from the scholarship committee reached out to Cline and inquired about her situation. Moved by her story, the committee worked with her. Cline’s family was able to move out of the homeless shelter into an apartment again.

She found a job with a private security company at about the same time. “I told the scholarship coordinator that I was taking the rest of 2015 off to get my family situated, and then I would be back,” Cline said.

“It was time to go back to school, but I was afraid that we would be homeless again,” Cline said. She began to doubt herself. “I thought about quitting then. Maybe I was putting my own dreams ahead of my family’s needs, maybe I wasn’t the sort of person that did awesome things.”

She attended the spring 2016 Brookshire Luncheon for scholarship recipients to thank Brookshire in person for his support but also to let him know that she intended to leave school.

Meeting Brookshire is a moment she will always remember. He listened to her words. Then he looked her in the eyes and told Cline that he believed in her.

That steady gaze, that unwavering belief, is what convinced Cline to return to school and pursue her dreams again.

“I wouldn’t have come back if it wasn’t for Dr. Brookshire,” she said. “There was nothing stopping me from then on.”

Reaching for the stars 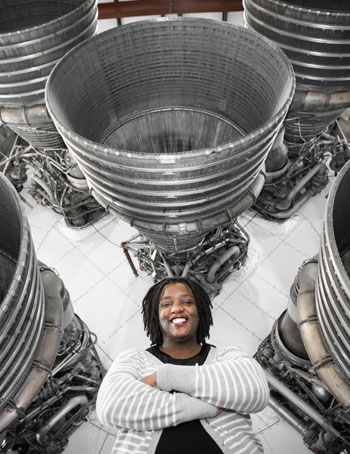 Cline drew inspiration and strength from her own mother’s story.

“My mom was a supermom. She went to nursing school when I was a toddler and I remember sitting in class with her. We’d have coloring books while she took notes in class,” Cline said. “She didn’t have all the struggles I did, but she put herself through nursing school, she did it alone and she got through it.”

As a result, Cline brought her kids along with her when needed and the PROMES staff at UH supported her anyway they could. “My kids grew up at UH,” she said tossing an affectionate grin at her now 14-year-old son and 11-year-old daughter. “They are Coog kids.”

She went on to graduate in summer 2018, with a job waiting for her at NASA.

Her only regret is Brookshire, who died in April 2017, wasn’t there to see her achieve her dreams. Cline celebrated with her family, her friends, co-workers, her PROMES family and the entire Cullen College Electrical and Computer Engineering Department. There were cheers, squeals, tears, laughter and lots of hugs.

Cline’s undergraduate cap and gown are carefully put away in her closet.

“I’m pretty sure I will never use them again,” she said. “But I won’t ever get rid of them, either. They are in there for whenever I need something that makes me happy, a reminder of what is possible.”

Cline loves her job and hopes the “coolness” of working at NASA never wears off. “NASA is like nerd heaven,” she said. “I have an entire agency of people to geek out with. Being able to hang out with astronauts is pretty cool, too.”

There is a serious aspect to her work, too, and Cline’s UH education prepared her for it.

“I used to fret about the complicated processes they taught us in Circuits class, and how many points we could lose for the simplest of oversights. I remember being shocked when Dr. Yuhua Chen [associate professor, Electrical and Computer Engineering] said ‘If your code is correct 95 percent of the time, you’re failing.’ In my mind 95 percent was an A,” Cline said with a laugh.

“But in the real world, that attention to detail and those high expectations are crucial to my work,” she said. “If I don’t make sure my product is 100 percent correct and guarantee it down to the minutest detail, at best my team will be disappointed. At worst, people could be hurt.”

Cline is making the most of her present. “The only thing I’m working toward right now is being the very best at what I do,” she said.
She shared some advice for other moms thinking of pursuing their dreams.

“I want any mom considering going back to school to know that she’s not alone, that there are moms who do this,” Cline said. “She can do this just as much as the kid who comes right out of high school and gets a degree. Being a mom, having kids, having a family, doesn’t make you any less. In a sense, it makes you even more equipped.” 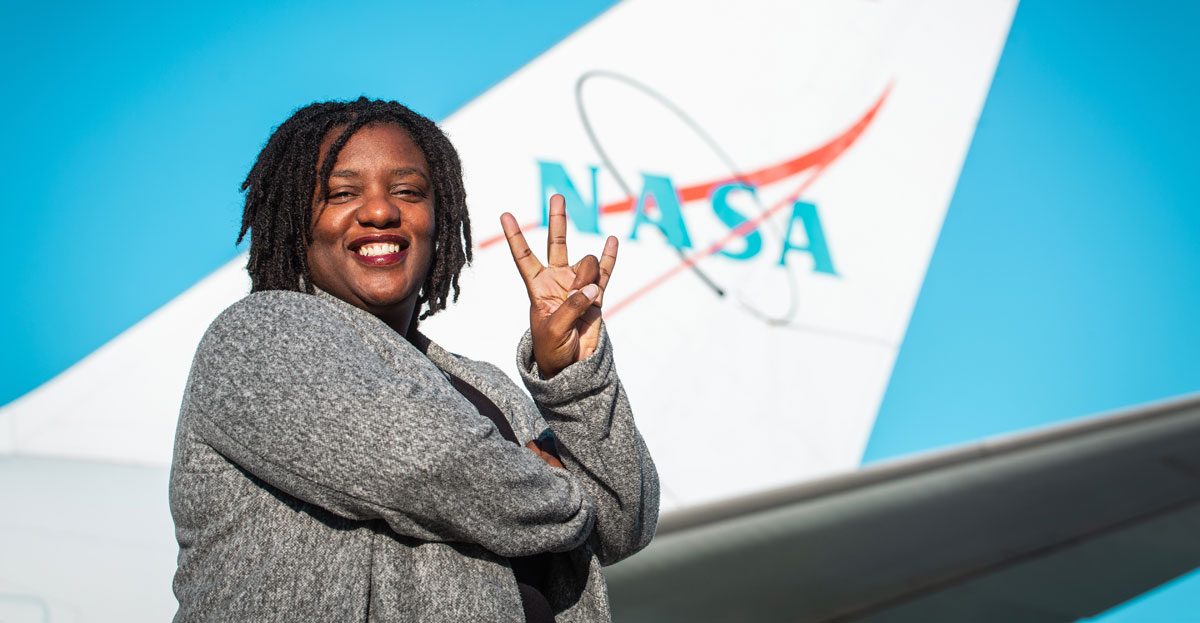