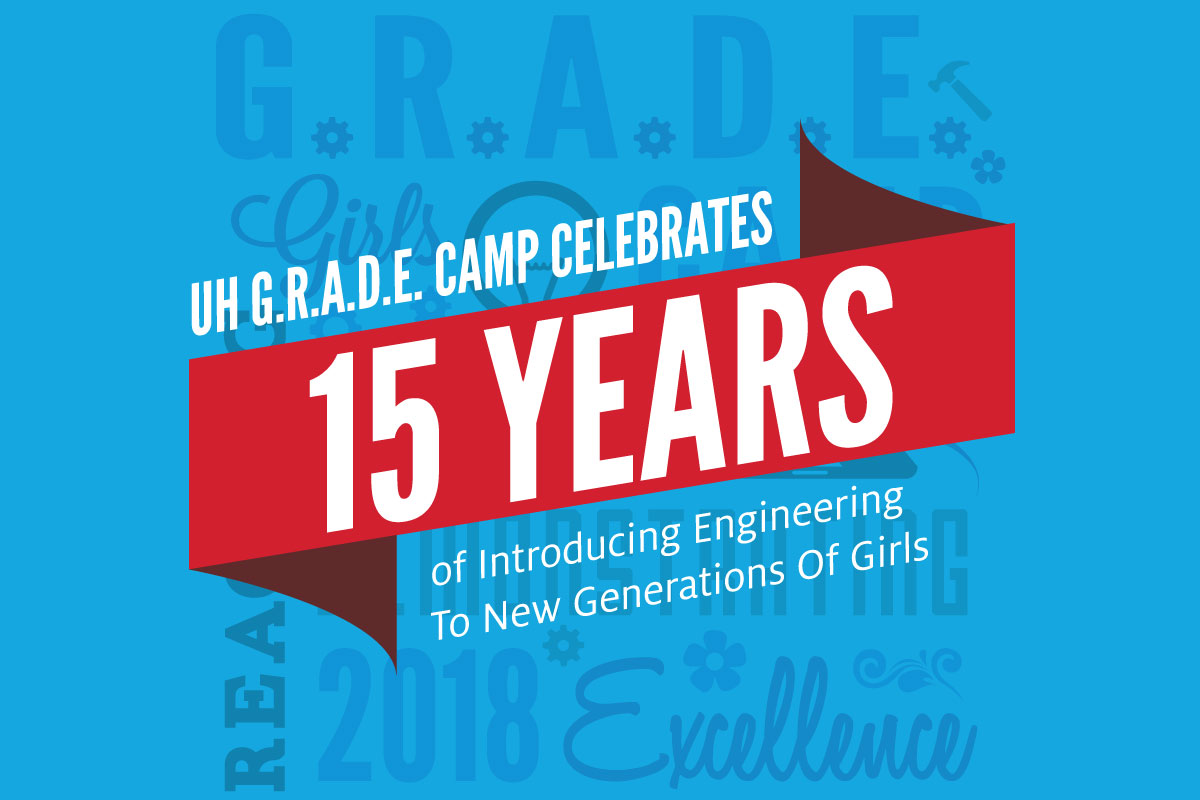 Spending summer days engineering can be creative, empowering and fun. Imagine taking bits and pieces of circuitry, plastic and metal to build robots, then programming your robots to navigate mazes. Or venturing out into the warm sunshine with friends to collect water from the UH campus pond and testing it for invisible microbes. Or maybe creating Texas-shaped earrings using a 3-D printer.

These are defining moments of doing, creating memories and building friendships.

All of these activities and more are part of G.R.A.D.E. (Girls Reaching and Demonstrating Excellence) Camp, offered by the UH Cullen College of Engineering. The one-week camp, which is offered twice in the summer, introduces girls ages 13-17 to the wonders of engineering. It starts them on a journey of recognizing their own potential and considering careers in science and technology. 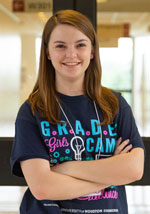 “A couple of weeks ago, I met a six-year-old girl. I told her I was going to be an engineer and she told me ‘Oh, that’s not a woman’s job.’ I was shocked. I really hope the G.R.A.D.E. camp experience can help change that perception, and that [attendees] go home and tell their friends about this engineering camp, then they help spread the word. I really hope the girls are inspired and they realize this — engineering — is for women.”

“I attended camp in 2012, which feels like a long time ago. Back then I thought engineering sounded kind of interesting, but I didn’t think it was something a lot of girls did,” said Julie Rogers, a recent graduate of the Cullen College's mechanical engineering department.

“Going to G.R.A.D.E. Camp … meeting like-minded girls and seeing all the counselors really inspired me,” she said. “I think it was part of the reason I went into engineering. And it also helped that the camp was at the University of Houston, where I ended up going to school.”

Women like Rogers who go from being G.R.A.D.E. campers to UH engineering students to G.R.A.D.E. Camp counselors are the raison d’être for G.R.A.D.E. Camp, according to Frank “Fritz” Claydon, who has been directing the camp since its inception, along with Stuart Long and John Glover — all electrical and computer engineering professors at the Cullen College.

About 75 percent of the campers end up majoring in an engineering field, according to Claydon.

“We have had campers become engineering students here who have then gone on to industry and have actually come back for our industry luncheons,” Claydon said. “That’s pretty cool.”

G.R.A.D.E. Camp at the Cullen College came about because of a need and an opportunity. 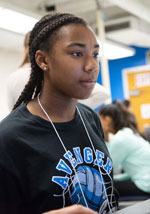 There’s a need for camps like G.R.A.D.E. Camp because a lot of people think girls can’t be engineers. Engineering is not just a guy thing, it’s for girls too. Girls can learn to do it and have fun.”

In 2001, deans of engineering across the state of Texas gathered with leaders in the semiconductor industry and the Texas Legislature to discuss the need to encourage more students to major in electrical engineering.

“We looked at that funding opportunity and thought, naturally, women were an untapped resource. That’s what spawned the idea,” Claydon said. “Later on we were able to get other funding from the National Science Foundation, corporations and other sources, and were able to expose people to all kinds of disciplines in engineering.” 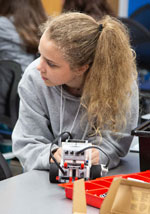 “My favorite part of G.R.A.D.E. Camp has been making a flowchart (putting together step-by-step instructions) for the Peanut Butter and Jelly sandwich. It was pretty funny because some of the instructions weren’t very clear so the sandwiches ended up pretty weird. One of the flowcharts never said to separate the two pieces of bread so the girl making the sandwiches had to go between the two slices of bread while they were still stacked up.

I learned that you have to be very precise when you’re making a flow chart and you have to double check your work to catch mistakes and missing steps.”

A 2007 National Academies of Sciences, Engineering and Medicine report found that “scientific and technical building blocks of our economic leadership are eroding at a time when many other nations are gathering strength.” The report, “Rising Above the Gathering Storm,” recommended urgent comprehensive and coordinated federal effort to maintain the nation’s competitiveness.

In 2012 a report from the President’s Council of Advisors on Science and Technology supported those findings. To maintain the nation’s standing in science and technology during the coming decade, the council predicted a need for approximately 1 million more STEM professionals than the United States would produce at rates existing when the report was written.

Although the UH Cullen College of Engineering was already ahead of the game with its G.R.A.D.E. Camps, UH established a centralized center in 2013 to support and expand those efforts. The UH STEM Center adopted G.R.A.D.E. and Step Forward Camps and launched new outreach efforts including kindergarten through 12th-grade teacher training; additional elementary, middle and high school student training programs, fairs and camps; and supportive programs for current university STEM students.

In 2018, the camp celebrated 15 years of outreach to more than a thousand campers. 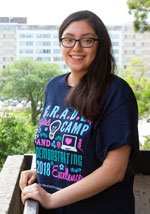 “I started as a mentor back in 2015. I really enjoy being able to motivate these girls and inspire them and show them what engineering is. It isn’t just math, science and numbers, there’s a lot of things that you can do with engineering, and there’s a lot of creativity involved.

I really like being able to show them how to do the robots and help them learn new skills. I hope to show them that, while it’s not going to be easy, there is a way to do it and you can reach your dreams.”

Guadalupe “Lupita” Villanueva almost didn’t go into engineering. She didn’t know what she wanted to do in college and was considering majoring in business because her mother had mentioned it. Fortunately she worked as a babysitter for a petroleum engineer who took the time to have a conversation with Villanueva.

“She told me all about her work and experience, and how it gave her the opportunity to travel across the world,” Villanueva said. “That really caught my attention and interested me.”

It turned out that Villanueva really liked petroleum engineering. “I had the opportunity to go for an externship with ConocoPhillips last year and we went out to a drilling rig. It was a pretty eye-opening experience for me,” she said. “I was able to see what I have been learning in my classes actually being applied in real life and see other people in the field and what they have accomplished in the industry.”

Villanueva never attended G.R.A.D.E. Camp as a camper but has served as a counselor since 2015.

“It’s good to start at an early age and introduce girls to engineering because their minds are really open to anything at that point, so it’s valuable to have camps like G.R.A.D.E. Camp,” she said. “I really enjoy being able to motivate these girls and inspire them and show them what engineering is. It isn’t just math, science and numbers. There’s a lot of things that you can do with engineering, and there’s a lot of creativity involved.” Villanueva graduated in December 2018.

Despite progress being made, disparities continue. A white paper published by the Society of Women Engineers in 2017 found that women represent over 57 percent of college graduates but only 22 percent of the engineers entering the workforce. Also, within the workforce, only 14 percent of engineers are women and women leave the engineering profession in greater numbers than men do.

This need is not news for G.R.A.D.E. Camp counselors and directors.

“I recently met a 6-year-old girl and told her I was going to be an engineer and she told me ‘oh, that’s not a woman’s job.’ I was shocked,” Rogers shared. “I really hope the G.R.A.D.E. Camp experience can help change that perception, and that [attendees] go home and tell their friends about this engineering camp, then they help spread the word. I really hope the girls are inspired and they realize this — engineering — is for women.”

“I believe that the girls-only aspect of the camp is important. They can just focus on being them, being who they are and having fun in camp,” he said. “It’s their moment.”

“G.R.A.D.E. Camp is the backbone of the type of outreach that we do and I really think the long-lasting nature of it has sent a message: If you want to do outreach correctly look at how G.R.A.D.E. camp is done,” Claydon said.