Two UH engineering professors were named 2019 Fellows of the Institute of Electrical and Electronics Engineers (IEEE). The appointment is the Institute’s highest grade of membership and is reserved for those with “an outstanding record of accomplishments” in an IEEE field. No more than one-tenth of 1 percent of IEEE’s voting members can be named fellows in a given year.

IEEE is the world’s leading professional association for advancing technology for humanity. Through its 400,000 plus members in 160 countries, the association is a leading authority on a wide variety of areas ranging from aerospace systems, computers and telecommunications to biomedical engineering, electric power and consumer electronics. 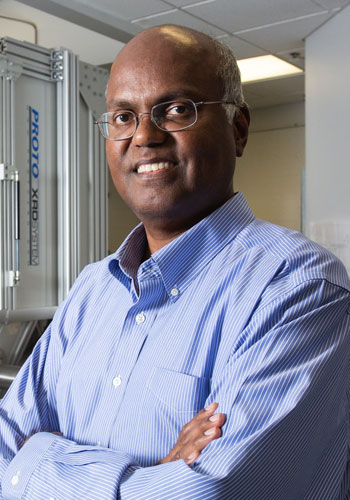 Venkat Selvamanickam, M.D. Anderson Chair professor of mechanical engineering at the University of Houston, was named a 2019 Fellow of the Institute of Electrical and Electronics Engineers (IEEE) in recognition for 32 years of research contributions in applied superconductivity, specifically the development and manufacturing of superconductor wires.

Selvamanickam, who earned a master’s degree in mechanical engineering and a Ph.D. in materials engineering from the UH Cullen College of Engineering, is one of the world’s leading experts on innovative manufacturing technologies related to superconductors.

He is the co-founder and the former officer of SuperPower Inc., which produces superconducting electrical wire, and has continued his research since joining the UH faculty in 2008. He is also the director of the Advanced Manufacturing Institute at UH and the director of the Applied Research Hub at the Texas Center for Superconductivity at UH.

The wire is now used by more than 200 institutions around the world for developing applications in various fields, including wind generators, energy storage, power transmission cables, magnetically levitated trains, medical imaging and defense.

He also led a highly successful program funded by the Advanced Research Projects Agency-Energy (ARPA-e) to achieve four-fold improvement in in-field performance of superconductor wires. Currently, Selvamanickam is leading a program funded by the Advanced Manufacturing Office of the DOE to develop advanced manufacturing technologies for superconductor wires for next-generation electric machines.

Selvamanickam's research at the University spans a wide range of advanced processing techniques for high-performance materials for energy and electronics applications, such as high-temperature superconducting thin film wires, photovoltaics and flexible electronics.

“We are working to overcome the obstacles to commercialization of high temperature superconductor wires through a number of projects from nanoscale materials engineering to large-scale manufacturing research,” he said.

Selvamanickam earned the Presidential Early Career Achievement Award in 1996, the highest honor the U.S. Government bestows on outstanding scientists and engineers beginning their independent careers. He has also received three R&D 100 awards, the Superconductor Industry's Person of the Year award, Wire and Cable Technology International Award, and the IEEE Dr. James Wong Award for Continuing and Significant Contributions to Applied Superconductivity Materials Technology. Selvamanickam is a Fellow of the U.S. National Academy of Inventors as well.

He has published 240 papers and holds over 80 issued patents. He serves as an associate editor of IEEE Transactions of Applied Superconductivity.

“I would like to thank the support of my colleagues, collaborators, sponsors and the University of Houston over 32 years for this exhilarating experience in the field of applied superconductivity,” Selvamanickam said. “I am grateful especially to my peers who spent their valuable time in preparing and supporting my nomination and to the IEEE Council on Applied Superconductivity and the entire IEEE Institution for this honor.”

Jose Luis “Pepe” Contreras-Vidal, Hugh Roy and Lillie Cranz Cullen distinguished professor of electrical and computer engineering at the UH Cullen College of Engineering, has been named a 2019 Fellow of the Institute of Electrical and Electronics Engineers (IEEE). He is being recognized for his research contributions involving brain-machine interfaces (BMI) and wearable exoskeletons.

“The research for which I am being recognized could not have been accomplished without the work of many talented students, postdocs, university colleagues and clinical partners from the Texas Medical Center, and the volunteers who have participated in our research,” Contreras-Vidal said. “I also appreciate the financial support from federal agencies, foundations and industry that made the research possible.”

Contreras-Vidal is one of the world's leading researchers in the field of noninvasive brain-machine interfaces. He has been featured in national and international media for his thought-controlled robotic exoskeleton, which can help paralyzed patients regain their mobility. He also leads in the translation of clinical BMI systems to patients with paralysis and limb amputation.

In 2010, Contreras-Vidal was the first to demonstrate EEG-based neural decoding of 3-D center-out hand movement kinematics from the fluctuations in the amplitude of slow cortical potentials in the delta (0.1-4 Hz) band. His breakthrough research has enabled significant advances in the design of noninvasive closed-loop real-time BMIs to robotic prosthetic limbs and powered exoskeletons for people with spinal cord injury, stroke and limb amputations.

The team also continues to study brain-computer interfaces in connection to the arts to further understand creativity and innovation, as well as develop BMI-based innovations to improve education, artistic endeavors and art therapy.

Contreras-Vidal is the director of the Building Reliable Advancements in Neurotechnology (BRAIN) Center at UH and the principal investigator for a NSF-funded Research Experiences for Undergraduates (REU) program — titled Neurotechnologies to Help the Body Move, Heal and Feel Again — that trains the next generation of engineers.

He is very involved with the IEEE, serving as an associate editor of the IEEE Transactions on Human Machine Systems. He is also a member of the IEEE Systems Council AdCom, the Engineering in Medicine and Biology (EMBS) Society, the Systems, Man and Cybernetics (SMC) Society, the Robotic and Automation Society (RAS) and IEEE Brain.