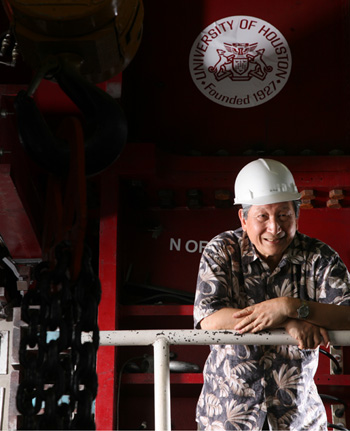 When Thomas Hsu first stepped onto the University of Houston campus in 1980, UH was an emerging research university in search of top research faculty members to advance the Cullen College of Engineering. To Hsu, who was then chair of the Civil Engineering Department at the University of Miami, heading an adequate but dated structural laboratory, UH offered a most attractive incentive: housing for a new research laboratory where he could design and build the innovative experimental equipment that could do the research that would advance the science and technology of structural engineering.

The Thomas T.C. Hsu Structural Research Laboratory houses the Universal Elements Tester, the world’s only large-size equipment to test wall and shell elements subjected to various types of forces, notably earthquake action. The behavior of these elements, predicted from Hsu’s theory, can then be integrated by high-speed computer to predict the behavior of today’s infrastructure such as large buildings, highways, bridges, offshore rigs, nuclear containment structures and others.

The Universal Element Tester was designed and built at the University’s South Park Annex in 1986. This equipment and lab space have been modernized over the past 30 years with more than $3 million in grants from the National Science Foundation and other public and industry sources.

Now 33 years later, after the directorship of Yi-Lung Mo, Moores Professor of civil engineering at UH, and current director Mina Dawood, associate professor of civil engineering, the Structural Research Lab is ready for larger space, updated equipment and resources to meet the growing and increasingly complex needs of a changing infrastructure that serves the society we live in.

A $1 million gift from the Hsu family is intended to pay it forward. The gift, eligible for a 75 percent match from the state’s Texas Research Incentive Program (TRIP), would further strengthen UH’s Tier One status.

While Hsu’s lab was originally focused on structural engineering, the new space will be designed to accommodate researchers and graduate students in a wider range of civil and environmental engineering disciplines. Joseph Tedesco, dean of the Cullen College, said the gift will provide the college with needed lab space and facilities to meet the needs of both faculty researchers and graduate students.

“Thomas Hsu has been part of the Cullen College during four decades of transformative change,” Tedesco said. “This gift to expand the Thomas T.C. Hsu Structural Research Laboratory ensures his legacy of cutting-edge scholarship, along with his support for generations of graduate students, will live on.”

Hsu received his master’s and doctoral degrees from Cornell University, where he and his family have a long, multigenerational relationship. He has received a number of honors and awards, including the American Concrete Institute Arthur J. Boise Award, ACI’s highest research award for concrete structures. He is an honorary member of ACI and a distinguished member of the American Society of Civil Engineers.

Eloise Brice, vice president for University Advancement, said the gift will make it possible for UH to offer important research opportunities to future graduate students. “This laboratory, and the equipment that it will house, will allow the Cullen College to remain at the forefront of advances in civil and environmental engineering,” she said.

Hsu said the gift is a way to express gratitude for his time at UH. “I would say I’m a very lucky fellow,” he said. “I tell my colleagues I am always happy to come to work. The University of Houston has been good to me, and I hope my gift is an incentive for others like me to give back the favor, with thanks.”

About the University of Houston

The University of Houston is a Carnegie-designated Tier One public research university recognized with a Phi Beta Kappa chapter for excellence in undergraduate education. UH serves the globally competitive Houston and Gulf Coast Region by providing world-class faculty, experiential learning and strategic industry partnerships. Located in the nation's fourth-largest city and one of the most ethnically and culturally diverse regions in the country, UH is a federally designated Hispanic- and Asian-American-Serving institution with enrollment of more than 46,000 students.

About the “Here, We Go" Campaign

The “Here, We Go” Campaign is the University of Houston’s first major systemwide fundraising campaign in more than 25 years. Gifts made from 2012 to 2020 will contribute toward the university’s key priorities, including scholarships, faculty support and strengthening the university’s partnership with Houston.