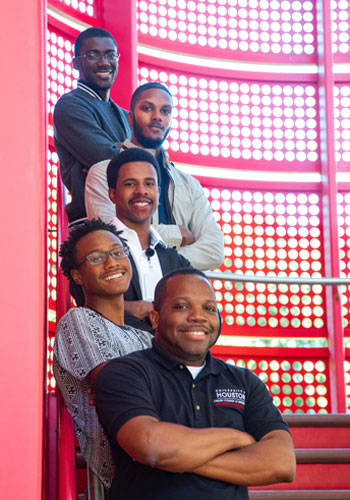 Producing graduates with STEM — science, technology, engineering and mathematics — capabilities continues to be a vital issue for the future of the United States. Growth in engineering and other STEM occupations is vastly outpacing the supply of skilled workers.

Meanwhile, African-Americans continue to be underrepresented in the STEM workforce and in academia. According to the “2017 Women, Minorities and Persons with Disabilities in Science and Engineering” report by the National Science Foundation, white males constitute about 49 percent of the workers in science and engineering jobs, while African-Americans make up about 3 percent of that workforce.

Just under 8 percent of science and engineering doctorates were earned by underrepresented minorities in 2014. A paltry 2.5 percent of engineering faculty nationwide are African-American males.

Jerrod Henderson, instructional assistant professor at the UH Cullen College of Engineering, has joined forces with Erik Hines, associate professor of counselor education at the University of Connecticut’s Neag School of Education, to work on a solution. They’re both co-principal investigators of a new project titled “Collaborative Research: Windows of Opportunity — Understanding Black Male Engineers in the Pursuit of Advanced Degrees,” which received nearly $400,000 in funding over three years from the NSF.

“I’m really interested in seeing an increase in the number of underrepresented folks in STEM,” said Henderson, who was the only African-American faculty in the chemical engineering department at the University of Illinois at one point. “I don’t want to always be the only one.”

Henderson’s research focuses on engineering education and the participation of underrepresented groups in the STEM fields. He is the director of the Cullen College’s Program for Mastery in Engineering Studies (PROMES), which has received national recognition for its efforts to increase student success and retention in STEM through mentoring, teaching, research and other programs and initiatives.

“Thanks to my PROMES experience, I see students all the time. I hear their stories. But it was important to actually conduct a research study that rises above the anecdotal,” Henderson said. “We need to analyze the data gathered and really understand the problem.”

The two researchers will be studying the experience of African-American male students in the context of three different types of institutions: Prairie View A&M University, a historically Black university; University of Connecticut, which is a primarily White institution; and UH, which is a Hispanic-serving institution.

“People throw that word around — diversity — but there are places that are diverse but not inclusive,” Henderson said. “UH happens to be a diverse and inclusive place from my experience. But I’m interested in what happens to students of color once they’re in engineering in different environments.”

The project is focused on three research questions:

2. What assets and strengths are possessed by Black males who persist or plan to continue in engineering beyond undergraduate studies?

3. What role does academic self-concept and engineering identity play in the intent to pursue advanced degrees among Black males?

Henderson hopes their research data will help recruitment and retention efforts of educational institutions and help create real upward movement in getting underrepresented groups involved in STEM opportunities. “We’d like to produce or disseminate best practices for engaging this sub-population of underrepresented people to think about graduate school,” he said.

In the last year of the grant, the researchers are planning to bring a conference centered on African-American males and higher education in engineering to the University of Houston campus.