A new paper and research from the Conrad Research Group in the William A. Brookshire Department Department of Chemical and Biomolecular Engineering at the University of Houston’s Cullen College of Engineering looks at how bacteria could be used to help with removal of pollutants, like in oil spills and wastewater treatment. 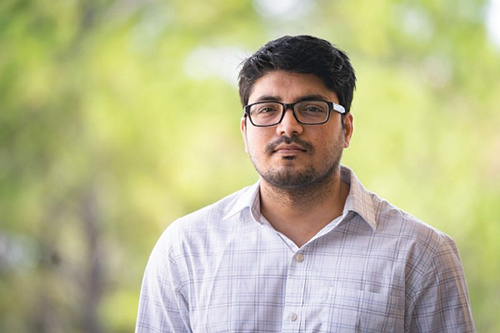 The primary author of the paper was Narendra Dewangan, a graduate student of Dr. Jacinta Conrad, the Frank. M Tiller Professor of Chemical and Biomolecular Engineering. Their work, “Bacterial motility enhances adhesion to oil droplets,” was published in the Soft Matter journal in August.

Appropriately enough, given the name of the publication, Dewangan said he primarily works in the field of soft matter. His studies focus on bacteria motility and adhesion on solid surfaces and oil-water interfaces.

“I study how bacteria interact, to a solid surface, and to a liquid-liquid interface at different conditions,” he said.

Dewangan described what got him into this work.

Many bacteria species are known to degrade oil, and in an oil spill scenario, dispersants are deployed to break down the larger oil droplets in ocean. By doing this, bacteria have more access to the oil due to increased surface area and so the oil can degrade faster.Narendra Dewangan

“My research is primarily inspired from offshore oil spills from oil and gas exploration and production operations, and transportation,” he said. “Many bacteria species are known to degrade oil, and in an oil spill scenario, dispersants are deployed to break down the larger oil droplets in ocean. By doing this, bacteria have more access to the oil due to increased surface area and so the oil can degrade faster.”

However, even at that basic form of life, there are differences from one type of bacteria to another. Namely, Dewangan said some forms can swim while others cannot, and this has implications for usage when it comes to mitigation.

“Since more than 80 percent of bacteria can swim, we were interested in studying how the swimming behavior [motility] improves the access of bacteria to oil droplets,” he said. “Swimming bacteria accumulate the droplets faster and in larger quantity than non-swimming [nonmotile] bacteria. The hydrophobicity and swimming behavior of bacteria can benefit a wide variety of fields, such as wastewater treatment or drug delivery to a target location in the human body.”

Dewangan started graduate school in 2015, beginning his research with Conrad the next year.

“Before joining UH, I worked in the oil industry as a production engineer, and because Houston is an energy capital I was attracted to apply here,” he said. “Later, I got more interested in emulsion and microorganism interactions, which was partly motivated from my previous job, and seeing how common the trails of spilled oils in the sea are.”

Dewangan graduated in the Fall 2020 semester, and has a goal of landing employment in the biotechnology sector.

“In my last five years I have learned a lot from my advisor and lab mates,” he said. “The amount of collaboration, feedback and discussion helped me improve my skills. I look forward to working in the biotechnology industry.”