Skip to main content
Lead News
Fundamentals
How Do Snakes 'See' In The Dark? 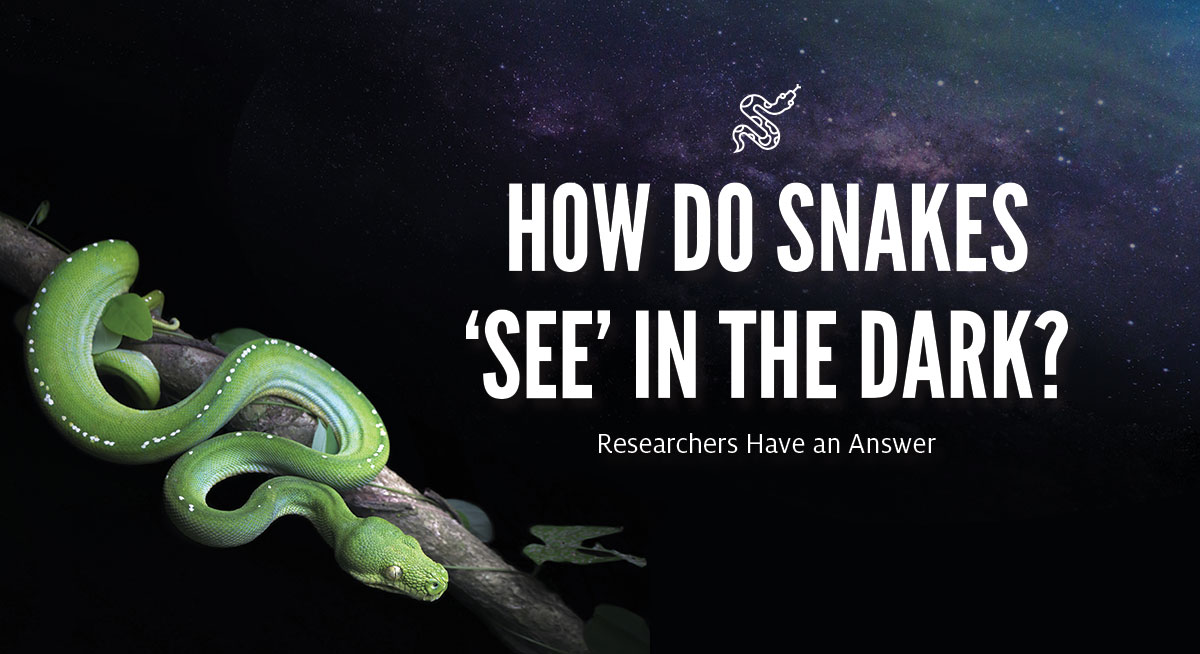 Certain species of snake — think pit vipers, boa constrictors and pythons, among others – are able to find and capture prey with uncanny accuracy, even in total darkness. Now scientists have discovered how these creatures are able to convert the heat from organisms that are warmer than their ambient surroundings into electrical signals, allowing them to “see” in the dark.

The work, published in the journal Matter, provides a new explanation for how that process works, building upon the researchers’ previous work to induce pyroelectric qualities in soft materials, allowing them to generate an electric charge in response to mechanical stress.

Researchers have known electrical activity was likely to be involved in allowing the snakes to detect prey with such exceptional skill, said Dr. Pradeep Sharma, M.D. Anderson Chair Professor of mechanical engineering at the University of Houston and corresponding author for the paper. But naturally occurring pyroelectric materials are rare, and they are usually hard and brittle. The cells in the pit organ — a hollow chamber enclosed by a thin membrane, known to play a key role in allowing snakes to detect even small temperature variations — aren’t pyroelectric materials, said Sharma.

But when he and colleagues last year reported producing pyroelectric effects in a soft, rubbery material, something clicked.

We realized that there is a mystery going on in the snake world. Some snakes can see in total darkness. It would be easily explained if the snakes had a pyroelectric material in their bodies, but they do not.Pradeep Sharma

“We realized that there is a mystery going on in the snake world,” he said. “Some snakes can see in total darkness. It would be easily explained if the snakes had a pyroelectric material in their bodies, but they do not. We realized that the principle behind the soft material we had modeled probably explains it.”

Not all snakes have the ability to produce a thermal image in the dark. But those with a pit organ are able to use it as an antenna of sorts to detect the infrared radiation emanating from organisms or objects that are warmer than the surrounding atmosphere. They then process the infrared radiation to form a thermal image, although the mechanism by which that happens hasn’t been clear.

Sharma and his colleagues determined that the cells inside the pit organ membrane have the ability to function as a pyroelectric material, drawing upon the electrical voltage that is found in most cells. Through modeling, they used their proposed mechanism to explain previous experimental findings related to the process.

“The fact that these cells can act like a pyroelectric material, that’s the missing connection to explain their vision,” Sharma said.

This work was part of the Ph.D. dissertation of Faezeh Darbaniyan, first author on the paper. Additional researchers on the project include Kosar Mozaffari, a student at UH, and Professor Liping Liu of Rutgers University.

The work explains the mechanism by which the cells are able to take on pyroelectric properties, although questions remain, including how the proposed mechanism is related to the role played by the increased number of ion channels found in TRPA1 proteins. TRPA1 proteins are more abundant in the cells of pit-organ snakes than in non-pit snakes.

“Our mechanism is very robust and simple. It explains quite a lot,” Sharma said. “At the same time, it is undeniable these channels play a role as well, and we are not yet sure of the connection.”