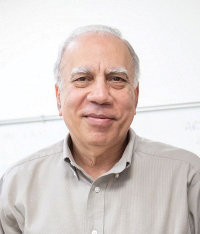 The award recognizes superior teaching, excellence in research, significant contributions to the petroleum engineering profession, and/or special effectiveness in advising and guiding students, according to the SPE. Recipients are nominated by their peers and other professionals. Past winners include Dr. Konstantinos Kostarelos in 2018, and Dr. Thomas Holley in 2014.

Soliman said it came as a pleasant surprise to be nominated and to win the award.

“I do not know who did it,” he said. “I actually inquired about it, so I could thank the person that nominated me. I haven't found out. It was a complete surprise, which made it extremely nice to receive.”

Soliman attributed the award to the improvements that have been happening across the Petroleum Engineering Department.

“The Petroleum Engineering Department ranking improved from 14 to 11,” he said. “We've added several professors, including two National Academy of Engineering members. We've restructured the doctorate program, completed a 25,000 square foot addition to the building, and the SPE student chapter was also recognized for its performance excellence.”

We want to improve our ranking further, as well as provide more courses on the application of data analytics, and focus on improving the success of graduate and undergraduate students.Mohamed Soliman

Soliman also noted that graduate and undergraduate students have won or placed in numerous SPE and SPWLA competitions, as well as in PetroBowl. Students also qualified for the international competition at the SPE Annual Technical Conference and Exposition 2020. The department has also started a student organization for the American Rock Mechanics Association.

Soliman is a distinguished member of the SPE, a fellow of the National Academy of Inventors and a registered professional engineer in the state of Texas. He received his doctorate in petroleum engineering from Stanford in 1979, after completing a master's from Stanford and a B.S. from Cairo University.

“We want to improve our ranking further, as well as provide more courses on the application of data analytics, and focus on improving the success of graduate and undergraduate students,” he said.