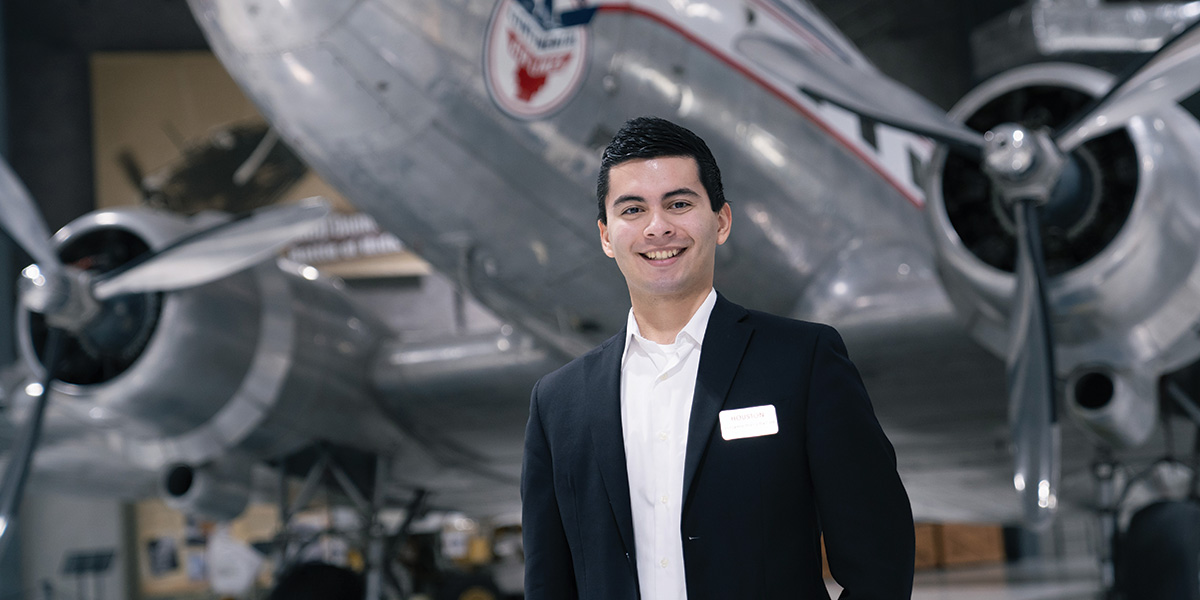 Building on his already robust academic achievements from previous years at the University of Houston, Cullen College of Engineering student Benjamin Estefano Diaz Villa has been recognized for his accomplishments and chosen as the Outstanding Senior for the 2020–21 academic year.

Diaz Villa was also the College’s Outstanding Junior for the 2019–20 academic year, and Honors College Outstanding First Year Student Award winner in August 2018. According to nominating paperwork submitted by Mechanical Engineering Department Director of Undergraduate Studies Dr. Holley Love, he has maintained a strong GPA despite challenges from the pandemic and a course load that included two notoriously difficult classes and a graduate-level course.

“Benjamin’s story of success and achievements is inspiring,” she wrote. “From the start of his life in Medellin, Colombia, to being a new immigrant in this country, and then making his mark at the DeBakey High School in Houston before coming to UH, and now, as a senior, owning a GPA of 3.976, Benjamin is the kind of student we in ME are very proud to attract and nurture.”

Benjamin’s story of success and achievements is inspiring. From the start of his life in Medellin, Colombia, to being a new immigrant in this country, and then making his mark at the DeBakey High School in Houston before coming to UH.Dr. Holley Love

Diaz Villa said the phone call from Love notifying him of the honor was a surprise, because he wasn't expecting to win a similar honor twice in a row. He identified Drs. Michelle Belco, Ben Rayder, Frank “Fritz” Claydon and Ralph Metcalfe, as well as professor Robert Cremins, as mentors in his educational journey.

This year, Diaz Villa also achieved another important thing to him — passing his Citizenship Test, and becoming a naturalized citizen of the United States. Born in 1999, his family moved to the U.S. in 2006. Between his academic mentors and his family, Diaz Villa said the importance of a balanced approach has been stressed to him. His parents earned engineering degrees while in Colombia, but both left behind lucrative careers to focus on their faith.

“My parents' professional journey taught me that one's life does not revolve around one specific career, but it must be well-balanced with many other interests and passions,” he said.

While studying at DeBakey High School for Health Professions in the Houston ISD, Diaz Villa became interested in mechanical engineering while doing hospital rotations. He hopes to continue his studies and to obtain a doctorate in Aerospace Engineering. However, he's also applied to aerospace jobs, wanting to keep his options open.

In addition to his success in the classroom, he has also completed an internship with TechnipFMC of Houston, served as an engineering mentor for the Ocean Energy Safety Institute and an engineering ambassador for the Cullen College of Engineering, and conducted research with Dr. Ralph Metcalfe.

In his free time, Diaz Villa enjoys playing the piano, and he is active in his church community. He is a pianist and composed for the M4E Music Ensemble, and he also played for the Cullen College commencement ceremony in December 2020. He is also an elected elder representative for the First Cumberland Presbyterian Church of Houston, and a volunteer for the New Day in Christ Ministries.