For the second year in a row, a group of Biomedical Engineering students at the University of Houston's Cullen College of Engineering will be working on a customized small car for a local child dealing with a mobility impairment.

In 2019, members of the Biomedical Engineering Society at the University of Houston (UH BMES) founded a chapter of Go Baby Go (GBG), a national community that provides children with significant walking and running issues a means for mobility, so that they can interact with the world around them.

Martin Reyes, the society's public relations chairman, also served as the primary contact and organizer for their efforts. He described some of the practical concerns about mobility devices.

“Traditional electric wheelchairs cost hundreds to thousands of dollars, which is a large sum of money for anybody to spend,” he said. “The effort of GBG is to modify pre-existing children's cars to better accommodate a motor-impaired child in place of an electric wheelchair.”

For the group's first completed project, they were contacted in January 2021 by officials at Creighton Elementary School in the Conroe Independent School District. In May 2021, they delivered a revamped, miniature red Jeep to a student.

“Considering that a paralyzed child will not be able to use their legs to drive the car, the challenge is finding a way to rewire the pedal to an alternative control method,” Reyes said. “We rewired the pedal to a button that we bought and fixed onto the steering wheel. We also needed to disable the car's loud noises by removing the right wires from its motherboard. Since a real wheelchair has a supportive backrest, we constructed one from PVC pipes and cushioned it with pool noodles. This all required us to drill holes, cut pipes, and tinker with the circuit boards of the vehicle.”

The group's primary contacts at the school were Glenn Funk, a special education teacher that is now at Stockton Junior High, and Jennifer Lee, a physical therapist at Creighton. Funk contacted the BME Society after seeing a post on a community forum for Go Baby Go chapters from around the United States.

“We started this project due to my previous experience with Go Baby Go when I worked in another district. I had a student in Tomball ISD receive a car from the Be an Angel Foundation, and it helped encourage his mobility at recess and PE,” she said. “When I had our student transfer in, I reached out to Mrs. Lee, who was our school physical therapist. I wanted our student to gain access to the playground and be able to have mobility when PE was moved outside to the large play field. Mrs. Lee was the one who found this amazing connection and really helped do most of the communication between UH and Creighton Elementary.”

Lee added, “We had so much fun last year working with the UHBME students and seeing the final product, and the student had a great time with it. He is at another school now, and unfortunately will no longer fit in the car, since he's grown. But the Conroe ISD therapy department has the car, and we discussed using it with different students. We haven't so far, but I feel confident it will be used in the future.”

Glenn said the student was using the car daily by the end of the 2020-21 school year.

“Our student used the car at recess, and whenever the PE teachers had them out in the large play field,” she said. “At recess, he was thrilled to be able to 'run' around with his peers and play, instead of sitting on the sidewalk, watching as the others played.”

Reyes identified three members of the group who helped to spearhead efforts.

“Rogelio Castilla, our new Project Coordinator, participated in every event day we held,” Reyes said. “He was there while we purchased the first PVC pipes, the moment we got the pedal-button to work, and throughout the completion of the project.”

“Regan Persyn, our former Vice President and new President, was my second in command when it came to organizing our efforts. She helped me conduct the initial measurements and purchase the materials needed, as well as build the car itself at every group meeting. Omar Nofal, our former Treasurer, was one of the ones who helped us secure the initial funding we used from the Engineering Alumni Association. He managed our project expenses and helped get the final product across the finish line.”

For the 2021-22 academic year, Reyes said they are working on a new vehicle for a 3-year-old with spina bifida. The group communicated with and identified the child in September and October. The finished car was delivered to the child a few weeks later. 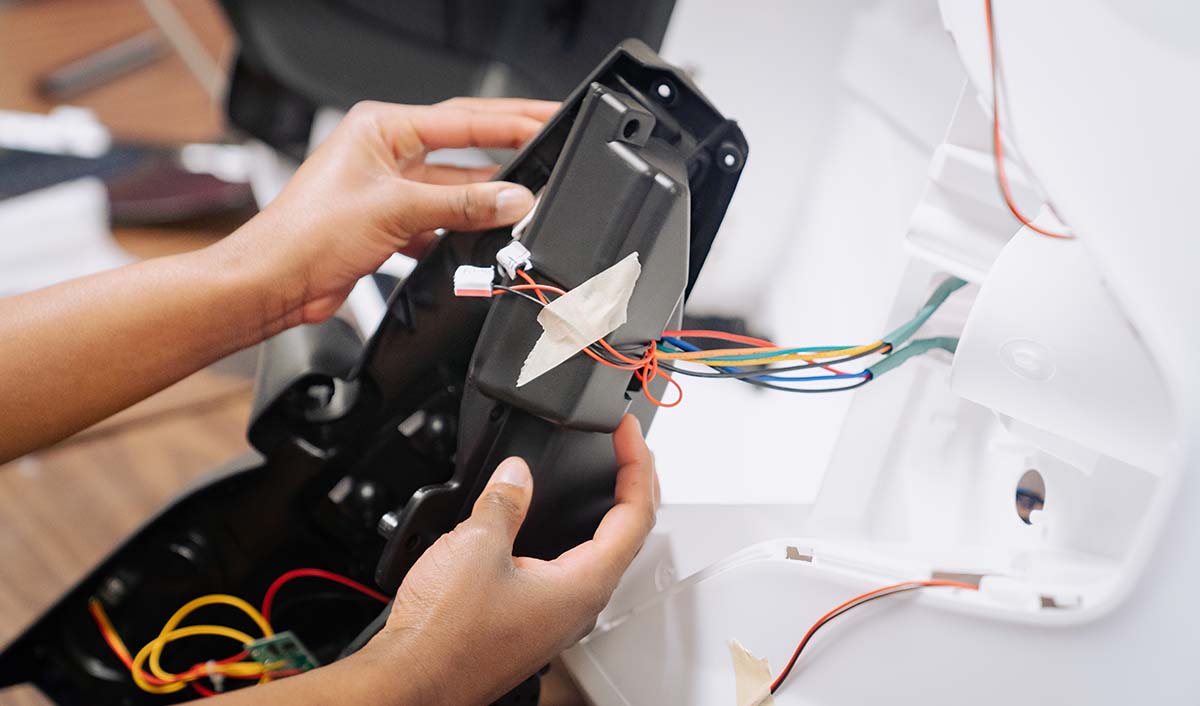 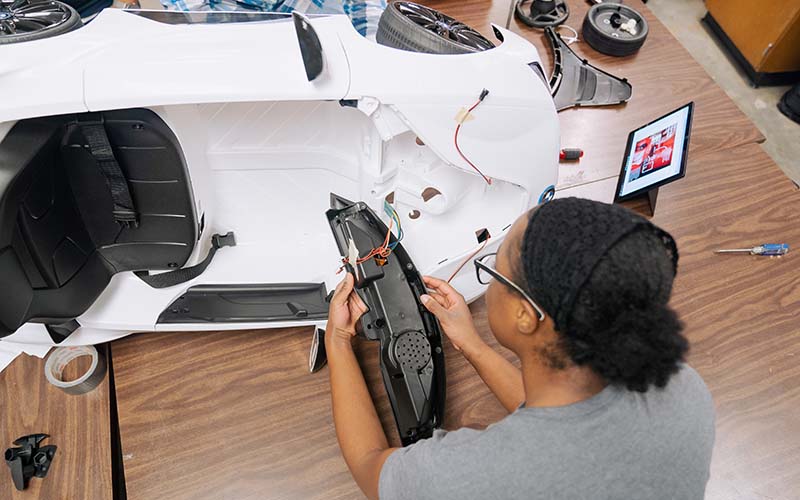 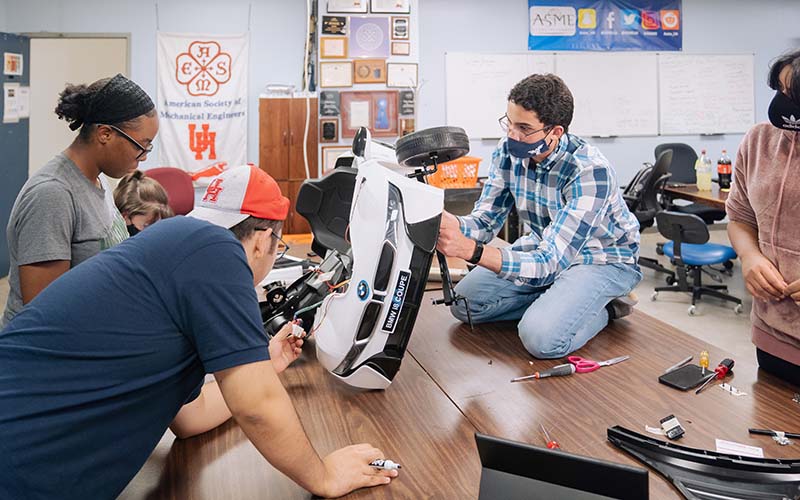 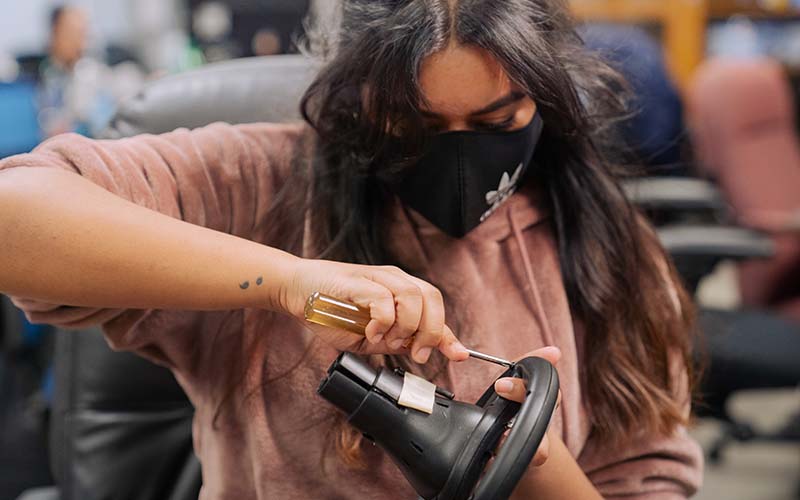