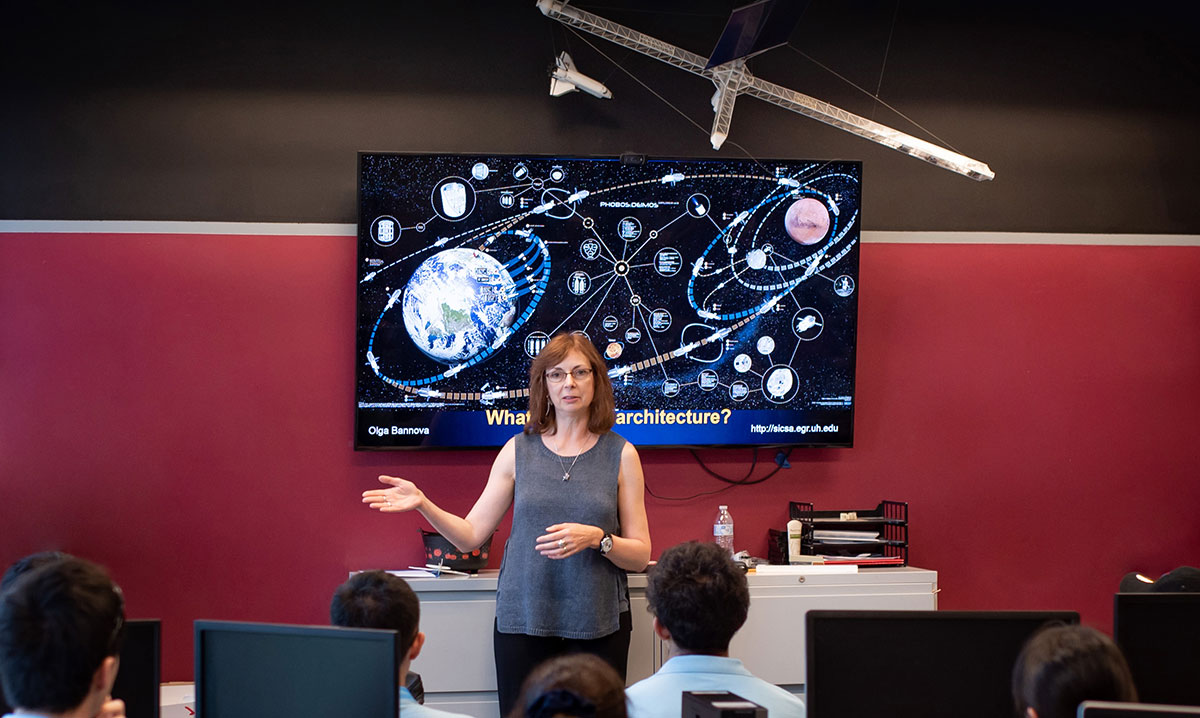 Olga Bannova speaks to a group of university STEM students from Japan at SICSA during a trip to Houston associated with NASA's global education program.

For a prestigious career featuring more than two decades of research, and 60 papers and presentations, University of Houston professor Dr. Olga Bannova was named the winner of the 2019 Outstanding Technical Contribution Award from the American Society of Civil Engineers Aerospace Division Executive Committee.

Bannova also serves as the director of the Sasakawa International Center for Space Architecture at the University of Houston, which provides the world's only Master of Science for space architecture. Bannova was nominated for the award by Dr. Ramesh Babu Malla, a professor at the University of Connecticut's Institute of Materials Science and a chairman of the ASCE Space Engineering & Construction Committee.

“I’m very thankful for Dr. Malla nominating me, which came as a big surprise to me,” Bannova said.

“Although we haven’t collaborated on projects yet, I’ve been actively working with him to advance ASCE’s Aerospace Division Technical Committee on Space Engineering and Construction, and organizing, chairing and presenting design and research for human spaceflight technical papers at Earth and Space conferences.”

Because of the COVID-19 pandemic, the 2020 ASCE conference and the awards presentation has been postponed to a future date. While Bannova said she was honored to be named the award recipient, she thought it would be more important for her work and the university's research going forward.

“It is important not just for me, but for the field of space architecture,” she said. “[It] indicates that our discipline is receiving recognition from the space industry, which will help our students and graduates in their professional life.” 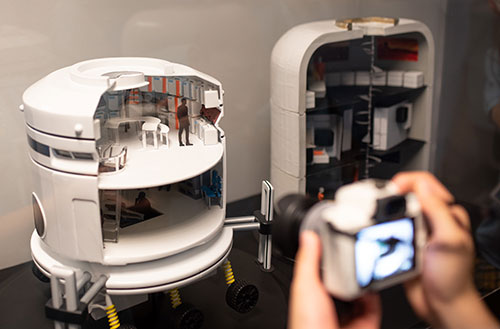 In his nominating letter, Malla wrote, “Dr. Bannova has made significant and seminal contributions and is a leader in the field of space architecture and in planning and designing of facilities for extreme environments on Earth. She has contributed significantly in the research and design studies of orbital and surface habitats and settlements, including inflatable structures, special design influences and requirements for different gravity conditions in space, and habitat concepts for extreme environments on Earth for over two decades.”

When asked about some of the projects that stuck in her memory, Bannova identified one that took place on the top of Greenlandic glacier, where human factors demand design responses somewhat similar to ones in space conditions.

“One of the earlier projects that I initiated and led was designing a new science facility for the NSF’s Summit station in Greenland,” she said. “Not only because it was a challenging project and we worked closely with scientists and a logistics company that supports NSF activities in the Arctic, but because we were invited to travel there, test our mock-up that we built close to the Summit camp, and talk with people who dedicate their life to working in the polar extreme environment, which has many similarities with living and working in space.”

She added, “Of course, there are space projects that were very exciting and equally demanding, such as the Minimal Functionality Habitable Element NASA study, where we collaborated with Boeing and ILC Dover on two separate teams.”

Going forward, Bannova said she was focused on continuing her work on space exploration.

“There are several research areas that will be critical for expanding human space exploration beyond Low Earth Orbit,” she said. “Designing next generation space habitats requires integration with AI, utilization of smart materials and new approaches for radiation protection. Right now, I’m working with my colleagues from Purdue, Vienna Technical University and few other institutions on integrating mixed reality technologies in space habitats.”