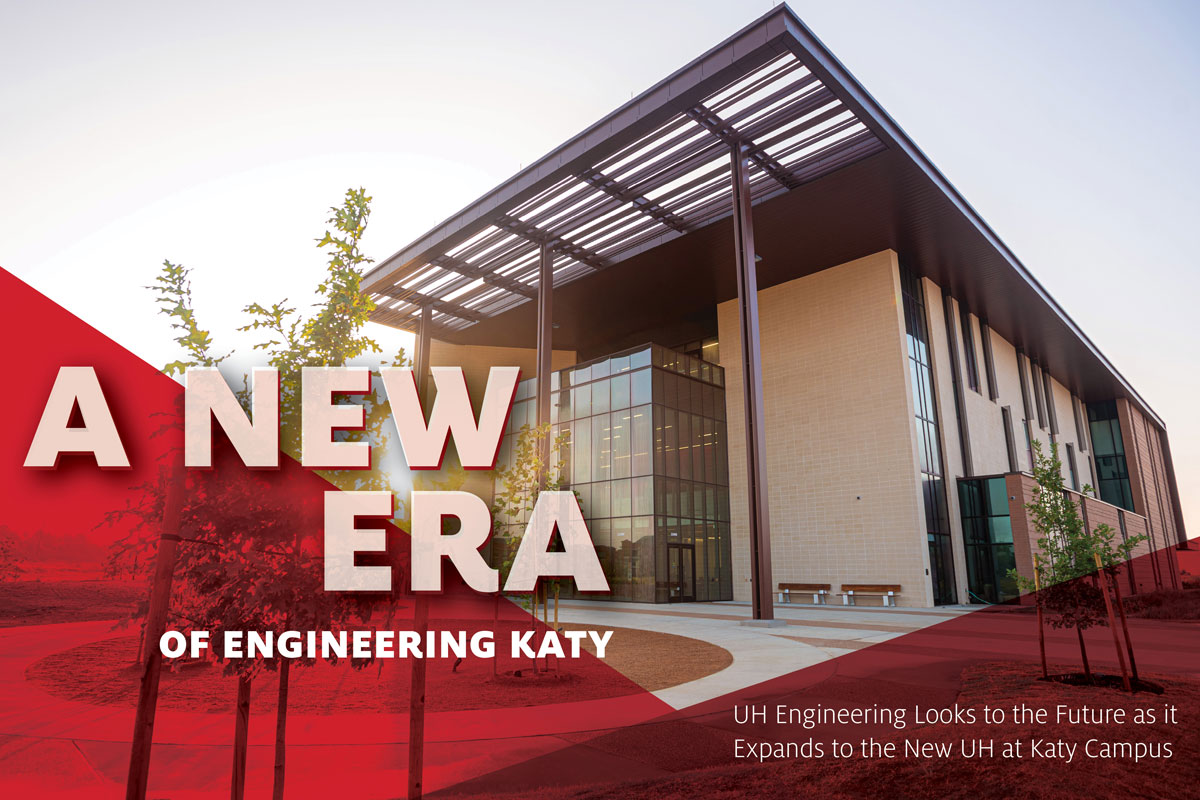 Built at the confluence of I-10 and the Grand Parkway, the new 80,000-square-foot UH at Katy building stands tall against a backdrop of big Texas sky and a constant flow of traffic.

This fall, the UH Cullen College of Engineering began offering high-in-demand engineering courses at the brand-new facility with state-of-the-art design studios and equipment. The move is part of larger plan to continue strengthening the Cullen College’s position as the leading source of engineering education in the Greater Houston area.

”According to the Greater Houston Partnership, the Houston area, known as the Energy Capital of the World, is home to nearly 5,000 energy-industry businesses, which employ a total of 250,000 area workers – almost 10 percent of the region's workforce. The Cullen College has made a tradition of taking the lead and offering industry-relevant engineering programs in the city it calls home. 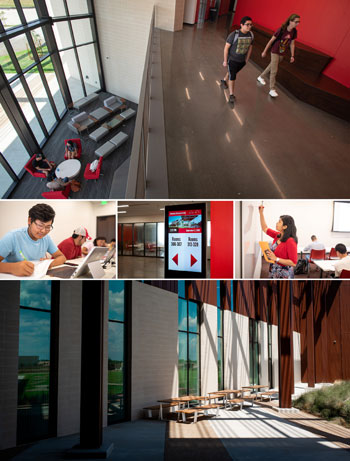 In 2011, the college established the first academic program in subsea engineering in the country and in 2012 offered the first master’s degree in the discipline. In 2013, the Cullen College spearheaded the establishment of the Global Subsea University Alliance.

The UH Cullen College perceived yet another opportunity to bridge a gap when it came to Katy, neighbor to the many companies located along the robust Energy Corridor.

“Given the demand for engineering talent across the Greater Houston area, the expansion of UH engineering programs in Katy is both imperative and inevitable,” Tedesco said. “The city of Houston needs a homegrown workforce trained to take on the engineering jobs of the future while filling in the skills gaps of today.

”The Katy Area Economic Development Council (KAEDC) estimated that the new UH at Katy facility will have an approximate $56 million economic impact over the next five years. Local leaders expect UH's presence to provide a highly skilled workforce and attract more businesses and jobs to the area.

“Currently, our labor shed area is home to over 50,000 employees in architecture and engineering occupations at world-class companies such as Wood, BP, Shell, ConocoPhillips, Aecom, LJA, Jones and Carter, and Baker,” said Lance LaCour, president and CEO of the KAEDC. “The offerings from UH engineering will allow Katy area companies to find high-quality candidates close to home.”

The beginnings of an idea

In addition to graduate and undergraduate course offerings, UH Engineering will also debut

UH's expansion into Katy and other areas makes strategic sense.

“The way Houston is expanding in all different directions, we have to provide local centers where we can achieve not only financial growth, but also the educational growth that is required by the local community out there as well,” said Ali Raza, chief digital officer of Apergy and a member of the UH Katy Engineering Advisory Board.

Back around 2008, then state Senator Glenn Hegar and then state Representative Bill Callegari started a task force to consider expanding UH to the Katy area. Since that time, it’s been years of planning and anticipation.

In 2016, the Cullen College put its plans into motion by purchasing the land for a future building and by offering two energy-focused engineering  courses at the Houston Community College (HCC) Northwest-Katy Campus.

By 2018, the engineering offerings had expanded to more than 15 graduate-level courses in Katy. That same year, UH celebrated the ground breaking on the UH at Katy project on May 23.

In Spring 2019, there were 26 graduate courses being offered in Katy in the key areas of subsea, petroleum, environmental, mechanical and electrical engineering.

However, the demand for top-notch engineering courses kept growing and so did the plans for engineering classes at UH at Katy.

Then finally on August 19, 2019, the new UH at Katy opened its doors and welcomed students for the first time. This fall, four engineering undergraduate courses and four graduate-level subsea engineering courses are being offered there. The Mechanical Engineering Senior Capstone Design class is the first to use the brand-new, spacious engineering design studios at the facility.

More courses are being planned for spring 2020. In addition, the college plans to launch three new undergraduate engineering programs  specifically designed for Katy: systems engineering, construction engineering, as well as computer systems and analytics. “These new programs will have their upper division in Katy, itself  –  they start in Katy and finish in Katy,” said J.R. Rao, who is the interim associate dean for engineering at UH Katy. “We’re very excited about that.”

Even though the wait has been long, the Katy community is happy to see the plans come to fruition.

“I obtained my master’s degree in civil engineering from UH in 1969, and remember the long drive from west Houston to the main campus,” said Bill Callegari, now retired from politics.  “With the expansive growth of Houston and accompanying traffic, it would be extremely daunting for prospective students to make that drive several times each week without sacrificing valuable time from their work and  families.”

Callegari considered the new UH at Katy to be a win-win for everyone involved – UH, the Cullen College, as well as Katy residents and businesses.  “It is very important to our community,” he said.

Dean Tedesco agreed. “This is what the city of Houston, the Katy area and the Energy Corridor needed, and we are the only college in the world with the expertise, resources and ingenuity to make it happen,” he said. 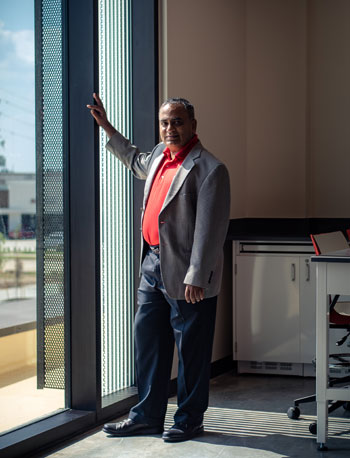 Now that UH at Katy is a reality and the first classes are progressing, the Cullen College administration isn’t resting on its laurels. Instead, the team is forging ahead with another exciting and ambitious plan.

A partnership between the University of Houston and Houston Community College (HCC) is currently in the works to enable Katy-area students to earn engineering degrees right in their neighborhood at an affordable price at UH at Katy.

The program, officially called the UH/HCC Engineering Academy, is set to launch in the fall of 2020.

“Students will have access to a world-class engineering education. The quality of education and research at the UH Cullen College of Engineering contributes to UH’s ranking as a Carnegie-designated Tier One public research university,” said Rao.

The strategy behind the program is to utilize both UH Cullen College and HCC resources for maximum benefit to the students.

“The curriculum in the Engineering Academy is structured so that students get to take all their engineering classes with the Cullen College faculty at UH in Katy, whereas other core non-engineering courses will be taught by HCC,” Rao said.

“Under this model, the students will have significantly lower costs in the first two years, thus increasing access to UH Engineering degrees, and they will also enjoy shorter commutes by attending classes at the conveniently located UH at Katy facility.”

Unlike traditional transfer programs, students admitted into the Engineering Academy are UH Cullen College of Engineering students from day one and are co-enrolled at both partner institutions. After successfully completing the academy in one or two years, students will then transition to the UH main campus to complete their bachelor’s degrees in several different engineering areas. There are five existing engineering  programs that will be offered to Katy students: civil, electrical, computer, industrial or mechanical engineering. Similar programs and partnerships have emerged all across Texas in recent years involving four-year university engineering programs and community colleges. The goal is to make engineering education accessible to a broader swath of students who may be deterred by the price tag of the more traditional route and address future workforce needs. The Texas Workforce Commission projects a 25 percent growth in engineering jobs across the state over the next decade.

“Relevance in the global marketplace is key to the training we offer our students and we at the UH Cullen College take our mission very seriously,” Tedesco said. “Engineers fix problems, and our new Engineering Academy will address student needs, community needs and state needs.