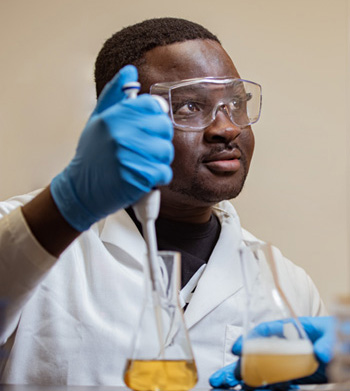 He is the second NDSEG fellow in the history of UH. The 2018 winner was Andrea Albright, a doctoral student in the Cullen College’s geosensing systems engineering and sciences program.

The fellowship, which is the highest honor awarded to graduate students by the U.S. Department of Defense, covers full tuition, research expenses and mandatory fees for three years. Fellows receive a monthly stipend of $3,200, up to $1,200 annually for health insurance coverage, and up to two all-expense paid trips – based on the government travel policy – per year for training and/or conferences that support their educational initiatives.

“Sola, without a doubt, is one of my top Ph.D. students and highly deserving of this prestigious award,” said Mehmet Orman, assistant professor of chemical and biomolecular engineering. “He is extremely smart, hardworking, determined and has shown superior performance in his research.”

Saba’s research uses metabolomics and several genetic engineering tools to investigate why certain bacterial cells play dead when treated with antibiotics, and later wake up when conditions are more favorable. This phenomenon is known as persistence.

“The economic burden of persistence is undeniable, not to mention the countless lives lost to persistence-related infection,” said Saba, whose interest include bacterial persistence, omics and genetic engineering. He is a member of the Orman Lab at UH.

“I go inside the E. coli DNA and turn off their genes one by one, all 4,000 of them, until I find the ones that control their ability to play dead,” he said.

Persistence is one of the reasons why bacterial infections such as cystic fibriosis, tuberculosis and urinary tract infection are difficult to treat. “E. coli, for instance, doubles every 22 minutes. So let’s say you took this amazing antibiotic that killed 99.999% of the bacteria. If even one cell survives the drug treatment, just wait 22 minutes and now you have two, then four, eight, sixteen, and so on,” Saba said. “After 12 hours, there is literally a billion of them, so you are right back where you started.” 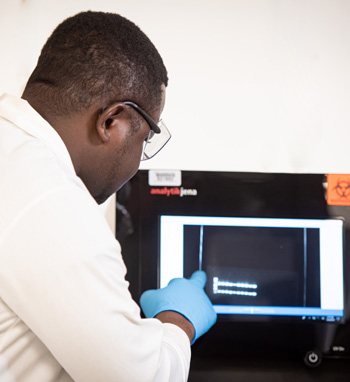 The Orman Lab members have identified some new genes responsible for persistence and are working to find more. In the near future, they hope to establish collaborative partnerships with Houston’s medical community and the Texas Medical Center.

For right now, Saba is thrilled about winning the fellowship. “A large number of the awards this year went to students from places like MIT, Harvard and Stanford, so I feel very honored and excited to get one for UH,” Saba said. “Obviously this would not be possible without the mentorship I got from Dr. Orman, Dr. (Muayyad) Al-Ubaidi at UH and Colonel Gabriel.”

Begun in 1989, NDSEG has awarded nearly 3,600 fellowships to U.S. citizens and nationals who pursue a doctoral degree in one of 15 supported disciplines at a U.S. institution. The NDSEG fellowship is sponsored by the Air Force Office of Scientific Research, the Army Research Office, and the Office of Naval Research under the Office of the Assistant Secretary of Defense for Research and Engineering.

Saba, who is also a captain in the U.S. Army Reserves, leads a preventive medicine unit and hopes his work can someday benefit the military community. “Historically, more soldiers have died because of infections than actual combat wounds,” he said.