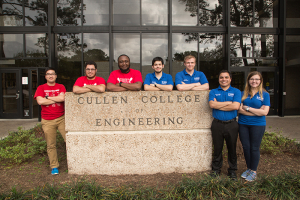 The Institute of Electrical and Electronics Engineers (IEEE) student chapter at the University of Houston Cullen College of Engineering (IEEE-UH) received high honors at the 2017 IEEE Region 5 Annual Conference and Student Competitions held in Denver, Colorado this April.

IEEE-UH received the Outstanding Large Student Branch Award for achievements in outreach and programming in 2016, beating out branches from the University of Texas, Rice University and the Colorado School of Mines.

The award is based on overall branch activity, including social events, fundraising, service projects, academic performance and participation in IEEE initiatives.

“We have been working closely with the IEEE Houston Section in event programming, so they were well aware of our work and recommended that we apply for the IEE Region 5 award,” said Cruz-Garza.

According to the group’s president, Moriah Hargrove-Anders, IEEE-UH plays an integral role in the Cullen College’s electrical and computer engineering department.

“We serve as a source of student opinion both in department affairs, through our Student Advisory Committee, as well as with outreach events, by providing university students the opportunity to teach younger students about electrical engineering,” Hargrove-Anders said.

“Our organization works as a bridge for IEEE national to work with undergraduate, graduate, national and international students at the University of Houston,” said Cruz-Garza. “We host engineering workshops, seminars and international competitions on campus, spread the word for grants and scholarships and provide our members a link with industry representatives.”

Len Trombetta, associate chair of electrical and computer engineering and faculty advisor of IEEE-UH, is impressed by the achievements of the organization and believes it is a testament to the consistent dedication of the students. “This year’s IEEE-UH members and officers have exceeded my expectations. I have enjoyed advising these students as they transform into leaders,” he said.

When asked about her hopes for the future of IEEE-UH, Hargrove-Anders explained, “As a student organization, I hope that we can continue to show our classmates and the electrical and computer engineering department that IEEE-UH is an indispensable resource.”

To learn more about IEEE-UH and how you can become a member, visit http://ieee.ece.uh.edu/