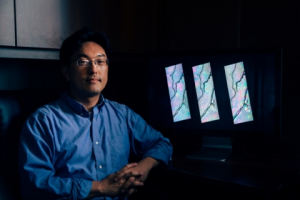 Lee is an expert in utilizing data collected from remote imaging and sensing technologies, such as satellites, to create robust maps and data sets of regions of the world that are difficult to access on foot. Last year, Lee won NASA’s New (Early Career) Investigator Award in Earth Science to use data collected from remote sensing technologies to better understand the hydrology and hydrodynamics of the waters in the Congo River Basin and its connection with climate change, deforestation and carbon emissions from Congo waters.

With his latest NASA grant, Lee will travel to several South Asian countries to train government officials to use a novel software toolbox to better predict and prepare for floods and monsoons. Lee and his collaborators at the University of Washington and Ohio State University developed the software, which translates satellite altimetry data into easy-to-interpret maps and text descriptions of river water levels throughout South Asia.

The software toolkit, Lee said, is incredibly user-friendly, and the process of training government officials to use the toolkit is simple, cheap and relatively quick. Together, Lee and his team will visit Bangladesh, Pakistan, Bhutan and Nepal – all countries that depend on trans-boundary river basins for their annual water supply.

Many South Asian nations – including Pakistan, Thailand, Bangladesh, Myanmar, Laos, Vietnam, India, Cambodia, the Philippines and Malaysia – depend entirely on the heavy rains and flooding of the annual monsoon season for their water supply. In some of these places, up to 80 percent of the total annual rainfall comes during the monsoon season, which usually begins in mid-May and ends in late October or early November.

But floods and monsoons in these countries often originate in river basins that are located outside of their nation’s boundaries. “These countries often don’t have enough time to prepare for flooding – for example, only about three days of lead time in case of Bangladesh – because of a lack of communication between the nations,” Lee said. “This is devastating for them.”

The annual monsoon rains combined with increased glacial melt have made flooding more severe as well as more difficult to predict in these regions, Lee said. Last year, news reports cited that millions of people across South Asia were stranded in their flooded homes and hundreds of people died from waterborne diseases, electrocution, building collapses and drowning.

Lee and his collaborators developed their software toolkit for interpreting satellite data a few years ago. Since then, Lee has focused on creating a very simple and accessible graphic user interface, or GUI, for their software toolkit. “The GUI is what takes all of the complicated data in the back end of the software – all of the calculations and algorithms – and translates it on the front end into a very user-friendly interface where the data appears as either a graphic map or a text output,” Lee said.

“This was a huge success,” Lee said. “In the past, they only had about three days of lead time to prepare for major floods, so we were able to increase their time to prepare by five days.”

Lee and his collaborators plan to travel to Pakistan in March to provide officials with the software as well as training on how to use it. “Part of the purpose of this visit is to talk with decision makers there about their specific needs,” Lee said. “Then, we will take their feedback back to our labs and incorporate it into a modified version of the software toolkit. This will allow us to provide them with a product that is tailored specifically to their needs.”

The ultimate goal, Lee said, is for all of these countries to use this software without the help of the researchers so that they can independently manage their own water supplies and better predict major floods and monsoons.

“There has been a lot of great basic research making use of satellite data, but NASA also wants to encourage researchers and academics to find novel ways of using satellite data for operational usage that has a real impact here on Earth,” Lee said. “That’s my specialty: using satellite data to solve real problems we are facing today.”