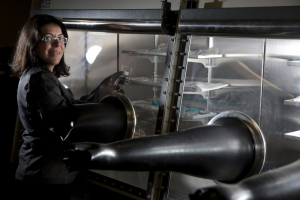 In 2012, Ardebili won the highly competitive National Science Foundation (NSF) CAREER Award for her research aimed at exploring the fundamental science underpinning flexible and stretchable lithium ion batteries. Ardebili said such batteries could be integrated into clothing or could be worn around the wrist like a bracelet. When sewn into fabric, they could be used to power equipment worn by soldiers in the field or to supply energy to patches placed on the skin and used for medical purposes, such as patient monitoring or diagnostics. A battery worn around the wrist, meanwhile, could be a convenient backup power source, serving as a charger for a smart phone that’s low on power, for example.

But with this grant, Ardebili said she will be developing an altogether new application for these batteries. “It’s an application-specific design,” she said. “Our research is very compatible with space applications, and especially spacesuits.”

Traditional lithium ion batteries use organic liquid electrolytes, which have very good performance at the cost of several drawbacks, such as instability, flammability, and, of course, the constant danger of the unsafe liquid leaking out. Because of this, lithium ion batteries must be protected inside of a hard case, such as the battery packs inside of toys and electronics. The same is currently true for spacesuits, which are designed with hard, bulky battery packs on the back, adding significant weight and volume to the suit.

The batteries Ardebili is developing, however, use electrolyte gel or solid polymer rather than a liquid. “The solid or gel generally gives us a safer component. It also gives us flexibility and the ability to make thin films, so from those aspects we have more advantages with these materials,” Ardebili explained.

Additionally, since there is no longer any danger of having an unsafe liquid leak out, the batteries Ardebili is developing don’t have the same restrictions on packaging as traditional lithium ion batteries. That is to say, spacesuits may suddenly become a lot lighter and more flexible thanks to Ardebili’s research. “If we could remove that hard, heavy battery case on the back of current spacesuits and make the batteries into a thin, flexible film that could be embedded in a pocket or even within the lining of the spacesuit, well, that would be great,” she said.

So far, Ardebili is well on her way to making battery-pack-less spacesuits a reality. Her team has already developed flexible batteries that can power an LED light. Now, she said, they are focusing on enhancing the performance and increasing the life of the battery. But there’s still a lot about gel and solid polymers that isn’t fully understood, she said. “That’s what we’re focused on – we need to do our own fundamental study to understand specific aspects of flexible batteries.”

In addition to her excitement about winning this award, Ardebili said she views this as an opportunity to involve Cullen College students in a project where they would be working side-by-side with some of NASA’s top researchers.

“Anything related to space and to NASA – who wouldn’t get excited? As an educator, I really want to use that to my advantage,” she explained. “This award motivates us to further involve this kind of research in the courses we teach, and it opens the door for more collaboration between the University of Houston and NASA. This benefits all of the students in our classrooms and helps them to connect-the-dots between their classroom lessons and their real world applications.”