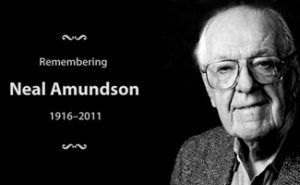 While all scientists seek to make a lasting impact with their research, few actually reshape their field altogether. Neal Amundson was one of those few. Amundson, Cullen Professor Emeritus of Chemical and Biomolecular Engineering and Professor of Mathematics at the University of Houston, was considered the father of modern chemical engineering and a leading educator in the field.

A native of St. Paul, Minn., Amundson was educated at the University of Minnesota, earning his bachelor’s and master’s degrees in chemical engineering and his Ph.D. in mathematics. After completing his doctorate in 1945, he accepted a position on the university’s math faculty and then joined the chemical engineering department in 1947. Two years later, at the age of 33, he became its chairman.

One of Amundson’s most important acts as department head was insisting on greater scholarly rigor in his program, both in terms of the education it provided and the research conducted by its faculty. When Amundson took the helm of the chemical engineering department at the University of Minnesota, chemical engineering education across the country was focused on industrial processes, with students expected to memorize facts about these processes and show their ability to perform them in the lab. Amundson changed that. In a move that would be copied in chemical engineering departments across the world, he redesigned the education in his program to focus not on empirical information but on modern scientific methodology and tools.

Amundson, with a Ph.D. in mathematics, pioneered the use of mathematical modeling and advanced solution techniques to predict the behavior of complex chemically reacting systems and processes. That was a pivotal advancement in the ability to understand and predict the behavior of these systems, said Dan Luss, Cullen Professor of Engineering in the Department of Chemical and Biomedical engineering at UH, who earned his Ph.D. under Amundson at the University of Minnesota and later recruited him to the chemical engineering department at UH.

“Neal taught us that instead of doing experiments, we should understand the physics and chemistry that govern the behavior of a system and then describe it in a mathematical model ,” Luss said. “He then used sophisticated mathematical tools to predict the impact of the operating conditions on  the behavior of complex  systems based on a very small number of experiments That led to significant advances in the design methodology of these systems and the education of chemical engineers.”

Amundson realized well ahead of others the future needs and development of the chemical engineering discipline. He therefore recruited to his department scientists from multiple fields, including bioengineering, chemistry, microbiology and material science. In doing so, he not only set the stage for great advances in chemical engineering, but became one of the first proponents of interdisciplinary research.

In addition to being a visionary leader, Amundson was a truly gifted scientist and researcher. He made important contributions to the understanding of chemical reactors, separation processes, polymerization, coal combustion and atmospheric science. He authored more than 250 articles that published in scientific journals and books and served as U.S. editor of the journal Chemical Engineering Science from 1957 to 1972, establishing it as the then-foremost journal in the field.

The unusually high percentage of successful students trained by Amundson is a clear evidence of his outstanding record as an educator. During his career, Amundson served as advisor to more than 50 Ph.D. students. His protégés include the former chairman and CEO of Exxon Mobil and other industrial leaders, many department chairs and deans, and several members of the National Academy of Engineering and other academies.

According to Luss, “Unlike many other advisors Neal did not believe in frequently meeting with and closely supervising his students. He would present a general outline of a problem and let the students think about how to tackle it and conduct the research. He expected students to come back only after generating something that was worth discussing. In his meetings he expected the students to state  ‘here’s what I did and what do you think about it,’ not ‘this is what I did, what should be the next step”.  As a result, his students built up the research experience and confidence to tackle novel problems.  I think that his style of mentoring was the key to the successful careers of many of his students.”

Amundson’s efforts and visionary approach to his field utterly transformed the University of Minnesota’s chemical engineering program. The department went from relative obscurity when he took the helm to the top program in nation. In 1975, Amundson left Minnesota for the University of Houston. His arrival marked the beginning of a period of great growth and success for the university’s chemical engineering program. His talents as a researcher and the esteem in which others held him helped attract new talent and acclaim to the department, which subsequently rose to a national top-10 ranking in the 1980s.