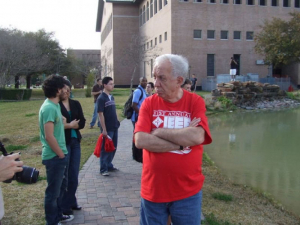 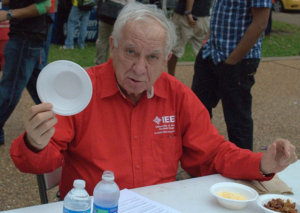 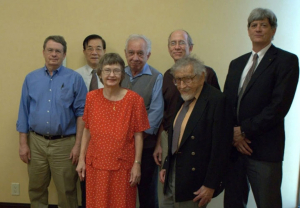 The Cullen College of Engineering at the University of Houston is saddened to announce the passing of Ovidiu Crisan, Ph.D., a professor in the Electrical and Computer Engineering Department, on June 20 in Orange, California.

After a two-year stint as a visiting professor, Crisan was promoted to professor, a position he held for 26 years. He was honored at a retirement luncheon in May 2012. He was well-known for his genorosity with his students and student organizations. In April 2011, he was named the IEEE Region 5 Outstanding Student Branch Counselor for the fifth time in 10 years, and his second year in a row.

Friends of Crisan shared the following memories of him.

Professor Ovidiu Crisan began his career in the power area in what was then the Communist controlled country of Romania. He worked his way up to be the Director of one of the largest power research institutes in the country at Timisoara.

At one point however, he decided for the sake of his family that it was best for him to leave. His position was high enough to justify a two-week vacation to the West. Only telling his wife, and not his two sons, they made plans to leave the country and defect to the West. They left everything behind. They could only take a small part of their financial savings that would be appropriate for a short vacation. They even had to leave the baby pictures of the two boys. They knew they would be searched at the border, and an album of baby pictures accompanying a mother, was a sure sign of a defection.

They got across the border to Austria and made their way to Germany where they stayed several months waiting to be allowed to enter the U.S. When I first learned about Professor Crisan he was washing dishes at a restaurant in New York City to provide a living for his family. He called me at my home on a Saturday evening and said he knew about some of my work at UH, and inquired about a possible position. We brought him to the university for an interview and hired him first as a Visiting Professor, and two years later as a full Professor. Shortly afterward the family moved to Houston and he began his career at UH. When we requested copies of his papers he had published while in Rumania, every reprint we got from his previous institute had whited-out spaces wherever his name had appeared on the author lines. In the first few years here he essentially revamped our entire power program, set up all the undergraduate power labs, and established a research program with the local power company. For years he was our only tenure-track professor in the power area, teaching almost all the undergraduate and graduate courses.

Professor Crisan was very devoted to his wife, Tatiana, and proud of his two sons. Unfortunately, Tatiana died shortly after the boys went off to college. Both sons grew up with a great appreciation of their newly adopted nation. Adrian, the older, received his BS in Computer Science from Rice and had a long career at Hewlett Packard and Sony. Dragos got his BS and MS at RPI and UT in Aeronautical Engineering and afterward served in the US Air Force, before moving to his present position at General Atomics. He won a national award for an essay he wrote in high school about being an American.

Professor Crisan will be missed – For his teaching of a generation of ECE power area students, his devotion to his students, his deep voice and unique inflection, and his straight forward manner in which he dealt with all he knew.

Engineering students lucky to have survived the Introduction to Engineering class, which the like of the great Dr Betty Barr taught, got to take Circuit Analysis or Networks from one of the rotating engineering professors. Dr Crisan was responsible for teaching Networks when I started. The first day of class was in the "r2d2" lecture hall and it was packed. Dr Crisan walked on stage and announced that the first question he typically got from students was whether this was a weed out class. He would say, in his wonderful Romanian accent, "I don't know what a weed out class is, but if that means half of you will fail consider this a weed out." I may have wept a bit leaving the room. Sure enough, the class eventually got small enough to move to a regular classroom in the old Engineering building. Dr Crisan religiously reminded us that units were very important and that setting up the problems - especially defining the direction of the current using the mesh method - was critical. We soon learned that you could get the correct numerical answer to all problems but if currents were not defined and units were not shown you could get a negative test result. My favorite Crisan tradition was returning graded exams in order from highest to lowest, and turning in the last exam with a "would you like fries with that? " remark.

I survived Networks and moved on to other classes, and eventually re-encountered Dr Crisan in the Energy Conversion class. The class was challenging but Dr Crisan also made it so interesting and I knew then I had found my calling. I took all the power classes I was able to take as an undergraduate - all taught by Dr Crisan - and then decided to become his graduate student. But he was more than my academic advisor, he was also a father. He saw me through my meeting my future husband and getting married, he encouraged me to interview with the local power utility for which I work for to this day and saw my kids being born. I, on the other hand, got to be with him thru many health challenges and eventually retirement.

He had an amazing sense of humor even in the face of adversity. I recall one semester he had fractured his leg and was told he couldn't drive. My husband and I, both graduate students at UH, immediately offered to take him home after school every night and offered to take him grocery shopping on the weekends but miraculously groceries always appeared at his house (before Instacart). We kept reminding him that he wasn't allowed to drive and he would get this gleam in his eye and say that it was just a few fish and veggies as if that would someone justify it. One evening he had us over after dinner and we ended up watching hours of his home videos back in Romania, his love and devotion toward his late wife still evident.

We would talk often about the status of the Texas electric grid and what a terrible idea deregulation was (I can only imagine what he would have to say about the winter storm) and I would sometimes come to him with work related questions. One particular occasion I told him we were looking to install a particular piece of equipment and that I was trying to calculate its impact, but that I had been reading over the old Westinghouse book (considered a Power Bible) and was having a hard time following. He requested to see the book and after a week produced a 20-page manuscript tracking the equations and how the author had switched the naming of the variables and units throughout the document and that's why I wasn't getting to a coherent response but he had fixed it. Classic.

He retired to California to spend time with his youngest grandchild and would always brag about how they spent hours doing mathematics - always a teacher. He will be sorely missed.

If you have a memory of Ovidiu Crisan that you would like to be shared on this story, please email sjgreen2 [at] central.uh.edu (subject: Memories%20of%20Ovidiu%20Crisan) .