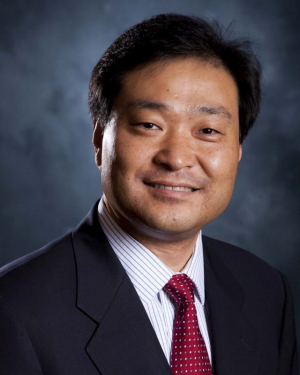 Jae-Hyun Ryou, Ph.D., an Associate Professor of the Mechanical Engineering Department at the University of Houston's Cullen College of Engineering, is the lead author for a new research article describing eye-movement sensors that can record data by less obstructive methods than previously thought.

“Highly-Sensitive Skin-Attachable Eye-Movement Sensor Using Flexible Nonhazardous Piezoelectric Thin Film” was published by Advanced Functional Materials in February. Additional authors from include UH include Ryou's students – Nam-In Kim, Jie Chen, Weijie Wang, Mina Moradnia and Sara Pouladi. Other listed authors include Min‐Ki Kwon, a visiting scholar while on sabbatical from Chosun University; Ja‐Yeon Kim, a visiting scholar while on sabbatical from Korea Photonics Technology Institute; and Xiaohang Li, a professor at King Abdullah University of Science and Technology, who was involved in the discussion and analysis of data with Ryou's students.

According to the paper, Ryou and his team developed a highly sensitive, noninvasive and skin‐attachable sensor made of a stable, flexible piezoelectric thin film. The film is also free of hazardous elements, and it overcomes the limitations of current computer‐vision‐based eye‐tracking systems. Piezoelectric strain sensors are developed as well. The sensor is fabricated from single‐crystalline III‐N thin film, by a layer‐transfer technique that is highly sensitive and can detect subtle movements of the eye.

Ryou said that the new findings are the result of targeted, application-driven research.

“My group has been exploring new-concept materials and device structures to find a new engineering solution in energy, electronic, photonic and sensing applications,” he said. “'One of the major objectives among them is to develop wearable and implantable sensors to measure physiological parameters for personal healthcare monitoring systems, and to detect early symptoms of abnormality and diseases of the human body for medical diagnosis and safety systems. We developed a sensor network that can measure pulse waves in various arterial sites and demonstrated that it can continuously monitor pulse wave velocity and artery augmentation index, which are important physiological parameters to detect several cardiovascular diseases.”

From there, Ryou said he and the group was intrigued about expanding the research to take into account eye movement, after reading an article about military training. Ryou noted that according to the article, fatigue and poor sleep – which can be monitored by eye movement – was a contributing factor in 628 U.S. Army accidents, and in 32 deaths.

“We initiated the research to develop a compact and non-invasive sensor for direct measurement of the ocular movement, as it is the promising objective indicator,” he said. “Tracking of physiological parameters changes is proven to be inaccurate, as the indicators such as the heart rate variability also vary with other states, including emotion, workload and physical fatigue. Brain wave evaluation by electroencephalogram (EEG) requires the intrusive and cumbersome procedures of the measurement. Currently developed eye-tracking systems (ETSs) relying on a computer-vision-based system is difficult to be miniaturized. This problem is particularly challenging for moving individuals at work or while walking.  We came up with an idea – Can we apply a similar operating principle of the previous sensor we developed to the detection of eye movement?”

Ryou said it was his student, Nam-In Kim, who suggested switching the area of the sensors from the eyelids and near the eyes, to the temple area, along with some other adjustments.

“The ideas worked perfectly,” Ryou said. “The sensor attached on the temple area is sensitive enough to detect various movements of the eyelid and eyeballs.”

Ryou said that the monitoring could allow for more fruitful research into a variety of areas, especially when it came to early detection of serious health issues.

“The human eyes are one of the most connected organs to the brain through nerves and muscles,” he said. “Therefore, many brain-related diseases are accompanied by abnormal eye movements. We are further developing the sensors to detect the early symptoms of brain-related diseases, such as ADHD, Parkinson’s diseases, traumatic brain injury and other issues. Also, we plan to extend our sensor development to measure the level of human stress toward an overarching goal of fatigue and stress monitoring of individuals in daily life.”

Postdoc Pouladi takes home another award
Posted on August 23, 2021
AMPing Up Delivery of Superconducting Wires
Posted on August 3, 2021
Using the Ancient Art of Kirigami to Make an Eyeball-like Camera
Posted on June 28, 2021