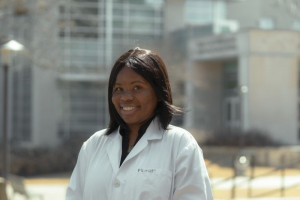 When Pemu Utienyin examines the world she inhabits every day, the University of Houston junior says that she can’t just ignore the ways in which she could help.

“As I walk, I see things, changes that need to be made,” she said. “Changes that I want to make. To do that, I have to keep looking forward to achieve my goals. A good friend of mine always says, ‘Don't worry, just get it!’ I live by that mentality. Believing in myself and trying my best to get what I want.”

It is that mindset and hard work that has led her to being chosen for the Provost’s Undergraduate Research Scholarship (PURS) program. Recipients receive a $1,000 scholarship to conduct a one-semester research project with a faculty member. Pemu is majoring in Mechanical Engineering, and minoring in Mathematics and Business Administration.

“I am working with Dr. Stacey Louie, and our research is primarily focused on investigating the binding affinity between Natural Organic Matter and pollutants of different forms,” she said.

As with most aspects of life now, Pemu was notified of the scholarship by email.

“I remember doing school work with friends and I just casually checked my email,” she said. “I was so excited because I know the program is very competitive and was more than honored to be a recipient for the scholarship.”

The scholarship isn’t the first time that Pemu’s hard work and skill have been recognized, though. She completed an internship for CHEVRON in the summer of 2019, and this fall, she started experimenting with soil pollutants for ECOLAB research at UH. Since August 2019, she has also worked as an assistant academic facilitator, mentoring and tutoring students on campus. In the coming year, she will start an internship with Celanese and a co-op with Clayco Inc., multi-billion dollar companies in the chemical and construction fields.

Pemu noted that support from friends and family members has spurred her toward her goals.

“Throughout my career, I have had so many people inspire me in different ways, that it would be a lie to say that I have achieved all that I have on my own,” she said. “My parents have been a major influence in my educational career. My dad, Jude Pemu, is also an engineer and was an inspiration for me to get into the field. Ensuring I get a good education is one of the many things he's done for me. Another person who has supported me is my aunt, Winifred Owumi. Coming into college, regardless of her busy schedule as an urologist, she never fails to follow through with my progress and is always ready to advise me when needed.”

She initially chose the University of Houston because of the diversity that the campus offered.

“I wanted to go somewhere I could not only learn and get a degree, but also learn from different people and cultures,” she said. “Our differences make life more beautiful and that was the one thing that drew me to Houston, and eventually UH.”

Pemu expects to graduate with a B.S. in Mechanical Engineering in December 2022, although she currently plans to explore other fields in graduate school.

“I hope to get a graduate degree in civil engineering, as this is something I am very passionate about,” she said. “Currently, I'm a business administration minor and I will be working towards an MBA in the near future as well.”