How it Works: The Basics of Wind Energy
March 2, 2018
By
Inez Hutchinson 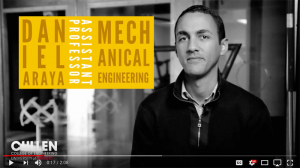 Have you ever wondered how wind energy is used to generate electricity or how wind turbines work? In a new video series titled “How It Works,” mechanical engineer Daniel Araya explains the basics of wind energy and how his research is contributing to the future of wind turbines.

In Araya’s lab at the UH Cullen College of Engineering, he and his team are studying how to better design wind turbines to increase their efficiency at generating electricity.

Araya conducts research on unconventional wind turbines, like the one he invented for use on urban rooftops to generate electricity from shifting winds and turbulence caused by tall buildings. He is currently seeking funding to install his turbines on top of Hess Tower in downtown Houston.

Do you have any science and engineering questions for our UH engineers? Tweet us your questions @UHEngineering … we may give you a shout out in a future episode!

Learn more about wind energy and Daniel’s work by viewing our video below!