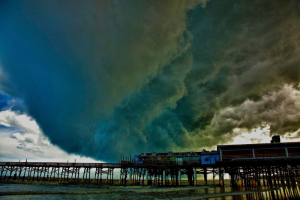 Two University of Houston researchers are part of an effort by the National Science Foundation to better understand how disasters such as Hurricane Harvey happen and how best to respond.

Steven Pennings, professor of biology and biochemistry in the UH College of Natural Sciences and Mathematics, will look at how well mangroves protect the coast, compared with salt marshes. Hanadi Rifai, professor of civil and environmental engineering and director of the environmental engineering graduate program at the UH Cullen College of Engineering, will characterize the chemical and microbiological contamination in Houston waterways after Harvey.

The work is part of a $5.3 million effort by the NSF to rapidly fund 59 projects, most of them related to hurricanes Harvey and Irma. NSF also plans to support work related to Hurricane Maria.

"NSF-funded scientists have a long history of advancing our understanding of large-scale disasters and their aftermath," NSF Director France Córdova said. "These researchers have increased our ability to predict the paths of tropical cyclones, found ways of improving flood water decontamination, and enhanced our understanding of the mechanisms that may cause levee failures. NSF’s new awards will result in similar advances critically needed in the face of such disasters."

Pennings’ work involves an area along the coast near Port Aransas, building on an ongoing mangrove study funded by the National Oceanic and Atmospheric Administration.

“The new question is, how well do mangroves protect the coast from storms?” Pennings said.

Mangroves, woody trees that grow in salt water, traditionally die back in cold weather but are spreading as hard freezes become less frequent. The $29,068 award will test a hypothesis that large woody plants, such as mangroves, can better resist storms and provide better protection than coastal marshes.

Rifai’s work looks at potential widespread contamination of water, soil and sediment following the unprecedented flooding from Harvey, which dumped more than 50 inches of rain over some parts of the Houston metro area.

It has been difficult to assess how a severe storm might affect water quality, both because the storms are relatively rare and because it’s difficult to collect and evaluate enough information using traditional methods. Rifai’s proposal, funded with an $181,801 grant, calls for using advanced metagenomics techniques to determine the microbiological condition of Houston’s waterways after Harvey.

Four waterways – Brays, Buffalo and Greens bayous and Peach Creek – will be studied.

“These assessment techniques will allow us to conduct a detailed investigation of the health hazards to area communities after Harvey,” Rifai said. “What we learn will guide decision making to increase resilience within the urban water infrastructure during and after extreme weather events.”