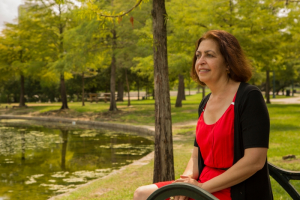 In the days after Hurricane Harvey slammed into the Texas Gulf Coast, thousands of evacuated families returned to their homes to survey the flood damage and begin the long road to repairs.

But the dream to rebuild isn’t a realistic one for many families in riverfront neighborhoods east of Houston, where industrial waste from the notorious San Jacinto Waste pits, a Superfund site, may possibly have contaminated the land.

The San Jacinto River unleashed floodwaters that slammed into homes in the Channelview, Baytown and Highlands neighborhoods in the wake of the hurricane. Many are now wondering what could be in that foul, murky water that inundated their homes.

Hanadi Rifai, professor of civil and environmental engineering and associate dean of research and facilities at the Cullen College, is one of the few people in the world who knows what’s in that water and why it’s so dangerous to human health.

In the 1970s, Houston’s Ship Channel was dotted with industrial plants that would dump toxic waste into pits along the San Jacinto River banks. As the river changed course over the years, these toxic pits became unearthed, allowing cancer-causing dioxin to enter waterways.

Rifai has lead research teams that tracked dioxin in water and sediment across the Houston metro area and beyond.

"It's our neighborhood. So we're looking at collecting samples ourselves. We definitely have an interest in tracking this more consistently over time," she told Houston Chronicle reporter Lise Olsen.

Rifai hopes to redeploy her research teams in the Galveston Bay and beyond to collect more samples in the wake of Hurricane Harvey. She fears toxic waste could have been redistributed to Houston neighborhoods along the San Jacinto River.

Many others in the Houston region hold the same hopes for Rifai and her research teams. In addition to the Houston Chronicle, reporters from KHOU, Houston’s CBS affiliate, and ProPublica also came calling for Rifai’s expertise on ridding Houston’s waterways of dioxin.

Read more about Rifai’s research in the Houston Chronicle, KHOU and ProPublica.