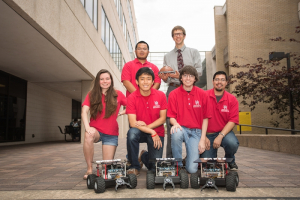 Last April a team of four undergraduate students from the UH Cullen College of Engineering’s electrical and computer engineering (ECE) department competed in the 2017 NASA Swarmathon at the Kennedy Space Center in Florida. The team placed second out of 19 teams.

The team was made up of undergraduate students Austin Dodge, Luis Robles, Steven Ventura and Vinh Vu. Master’s student An Nguyen and Assistant Professor Aaron Becker advised the students.

The NASA Swarmathon challenges college and high school students throughout the country to compete in developing algorithms and computer code to control large numbers of small robots, known as “swarms,” to perform specific tasks on the surface of Mars.

“Every year the competition organizers add a new element to the contest, so this year our swarmies had to pick up cubes and deliver them to a home base, while roaming the surface of mars,” said Dodge.

This year’s competition required teams to use the swarms to find and collect resources free of human intervention or maps. Provided only with robots that are programmed for specific uses, such as cleaning up hazardous waste or rescuing people in disaster areas, the competitors had to write algorithms that allowed the robotic swarms to perform the new tasks at hand.

With only two short months to prepare for the competition, the UH team found the project to be a crash course in engineering, computer science and robotics.

“In two months we had to learn about the robot operating system,” said Vu. “Since you cannot modify the robot, we had to rely solely on our software skills.”

The Swarmathon competition also doubled as the UH team’s senior design project, helping the undergrads connect-the-dots between classroom lessons and their real-world applications.

“I liked the connection to NASA and that the project went beyond hardware and explored the programming of robots,” said Robles.

The team also appreciated the opportunity to meet fellow future engineers while attending the competition.

“I made friends with other students and we talked about the algorithms and the code we were given by NASA, so that was great” said Ventura. “We were also able to talk to the NASA engineers and that made me want to work with NASA one day.”

Becker said the most rewarding part of working with the team was watching the students work through the problems and grow in the process.

“I love when the students say, ‘We got this demo ready and it works!’ Seeing their victories is the fun part. They broke down a big problem into a set of small challenges, then added these components together to build a winning combination,” Becker said.