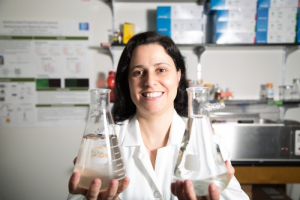 The Houston Chronicle recently profiled three UH engineers whose research is changing the world and shaping the future.

Venkat Selvamanickam, M.D. Anderson Chair Professor of mechanical engineering, was featured for his work with high-temperature superconductors – materials that can transport electricity with very little resistance. The superconductors Selvamanickam has created have 300-times the current-carrying capacity than traditional copper wire. These superconductors can be used for high-speed trains, such as the Maglev (from the words magnetic levitation) superconducting magnetic airborne train in Japan, or to make wind turbines more efficient and MRI machines more powerful.

Read the full Q&A with Selvamanickam in the Houston Chronicle at http://www.houstonchronicle.com/local/history/city-of-possibilities/article/Using-superconductors-to-vastly-increase-energy-10415524.php?t=e785068bc1438d9cbb&cmpid=email-premium

Debora Rodrigues, associate professor of civil and environmental engineering, is helping to improve global access to clean water with her nano-sized technology that can weed out metals and radioactive materials from drinking sources. Rodrigues’ technology requires little energy and is inexpensive to manufacture, making it an ideal candidate for a spin-off business. Rodrigues has partnered with a group of UH students who created a start-up called WAVVE to take her technology out of the laboratory and into the marketplace.

Read the full Q&A with Rodrigues in the Houston Chronicle at http://www.houstonchronicle.com/local/history/city-of-possibilities/article/Keeping-water-clean-in-a-less-expensive-way-10415493.php?t=5769a0c365438d9cbb&cmpid=email-premium

Jose Luis “Pepe” Contreras-Vidal, Hugh Roy and Lillie Cranz Cullen University Professor of electrical and computer engineering, is helping paraplegics walk using only the power of their thoughts. Contreras-Vidal’s work centers around brain-machine interface systems, or BMIs, which connect a user’s brain signals with a robotic exoskeleton or prosthetic limb. Algorithms written by Contreras-Vidal interpret a user’s brain activity – in this case, their intention to walk or move a limb – into movement of the prosthetic limb or exoskeleton. The overall goal of Contreras-Vidal’s research is to unravel the mysteries of the human brain through reverse-engineering – a quest that has brought him into art and children’s museums, elementary schools, dance performances and other public art displays to monitor the patterns of brain activity of hundreds of freely-behaving art creators and observers all over the world.

Read the full Q&A with Contreras-Vidal in the Houston Chronicle at http://www.houstonchronicle.com/local/history/city-of-possibilities/article/Channeling-brain-waves-to-enable-paraplegics-to-10415475.php?t=8bb0d5dafd438d9cbb&cmpid=email-premium