UH Professor Set to Meet with Congress about National Robotics Initiative
May 23, 2016
By
Jeannie Kever 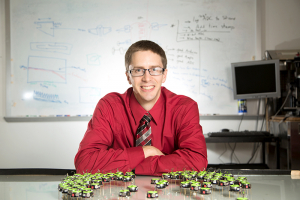 A robotics expert with the University of Houston Cullen College of Engineering will meet with members of Congress and other scientists next month to discuss the National Science Foundation’s National Robotics Initiative.

Aaron Becker, assistant professor of electrical and computer engineering, is funded under the initiative for his work in swarm robotics, or controlling the movement and behavior of large numbers of robots. He was invited by NSF to participate in the Congressional Robotics Caucus on June 9.

Much of Becker’s work involves millirobots – millimeter-sized robots – which have medical applications, from delivering targeted drug therapy to performing minimally invasive surgery. He will have slightly larger robots on display at the Capitol.

Becker said the event will be an extension of outreach efforts he and his lab routinely do at schools, scout meetings and community events. “Robotics is a special way to introduce STEM subjects,” he said.

While he and his students taught girls to make UH earrings during a Girls Engineering the Future event in April, the goal will be more serious in Washington, D.C., as the NSF seeks to help members of Congress and their staffs better understand the role that robotic technologies will play in health care, manufacturing, transportation and other sectors.

“It’s showing some of the visual aspects of what we do,” Becker said of the upcoming demonstration. “My goal is to share some of the great things we’re doing, how the University of Houston is a hotbed of innovation.”

A paper Becker and two collaborators from Harvard Medical School presented at last year’s IEEE International Conference on Robotics and Automation described how medical millirobots, powered by the magnetic field in an MRI machine, could offer targeted drug delivery or surgical intervention.

MRI – or Magnetic Resonance Imaging – scanners exert a magnetic field, which Becker has demonstrated can be harnessed and used to move tiny metal-filled robots through the body’s blood vessels. Additional algorithms can be used to steer them to a specific target and even to instruct them to assemble a type of “Gauss gun” inside the body, which can provide the power to pierce tissue for drug delivery or microsurgery.

Becker’s lab also is working on several projects outside medicine, including one which would use robotics to kill mosquitos. Despite claims about mosquito-repelling plants, bug-zappers and the like, he said the only effective solution is pesticides, but as mosquitos become resistant to the chemical makeup, new pesticides are continually needed. The project is undergoing testing.

A second project, done in collaboration with UH geoscientists, uses drones and small robots to monitor and assess areas for potential oil and gas development. Many regions targeted by energy companies for potential development lack roads and other infrastructure, Becker said, making robotics an efficient way to set sensors and perform other tasks.

“It’s a new way to explore,” Becker said. “It’s expensive to drill an oil well. You want to be sure you’re in the right place.”