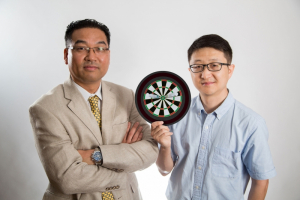 Two industrial engineering professors at the UH Cullen College of Engineering received a grant from the Cancer Prevention & Research Institute of Texas (CPRIT) to optimize the clinical effectiveness of proton therapy for cancer patients.

The competitive three-year, $879,362 grant was awarded to research assistant professor Wenhua Cao, who will serve as principal investigator, and Gino Lim, Hari and Anjali Agrawal faculty fellow and chairman of the industrial engineering department. Researchers from two other Texas institutions – the University of Texas MD Anderson Cancer Center and Rice University – are included in the collaborative cancer research project.

Proton therapy works by precisely delivering a prescribed amount of radiation to a tumor site inside of the body, while minimizing the radiation exposure to nearby healthy tissues.

Although proton therapy is generally considered a superior form of radiation therapy, not all cancer patients respond equally to the treatment.

“A review of nearly 20 years of research into proton therapy has claimed that the treatment is 10 percent more effective than a traditional photon therapy, such as intensity modulated radiation therapy [IMRT]. However, our preliminary research revealed that’s really not the case,” Cao said. “This percentage of effectiveness of proton therapy varies a lot from patient to patient. It’s not across the board.”

“It all depends on the kind of patient and the biological tissue response to radiation,” Cao said.

“We need to move away from cookie-cutter approaches and toward personalized medicine, which is very important for the future of cancer therapies,” Cao said. “You can’t assume just because two people have a similar background, ethnicity or age that the same treatment approach will work for both patients.”

In order to move toward more personalized treatments for cancer patients, researchers must first learn how to optimize proton therapy for each patient.

“With proton therapy, precision is key,” said Cao. “If the protons aren’t delivered to the exact site [of cancer] every single time, then it can drastically compromise the effectiveness of the therapy.”

Proton particles are heavier than photon particles. When proton particles hit their target inside of the body, they stop immediately. If the proton therapy is delivered with precision to the tumor site, no damage is caused to surrounding healthy tissues and patients experience far less side effects as a result of the radiation.

But determining how to deliver the protons to the site of the tumor in the most effective way requires solving a massive optimization problem. For starters, patients must be positioned in the exact same way each time they receive the proton-delivered radiation, which can be up to five days a week for several weeks. During this time, if the patient loses or gains weight, the changes in their tissue can alter the location of the tumor and require changes to how the radiation is delivered.

And even if the patient is correctly positioned for each session, providers must take into account all of their involuntary movements, such as the rise and fall of the chest while breathing, that can shift the location of the tumor and result in an incomplete dose of radiation.

Then there’s the angle at which the proton beams are delivered to the tumor. If there are 36 possible angles to deliver radiation to the tumor site and physicians must choose somewhere between two and four angles that combine to provide the best treatment, that leaves them with 72 million combinations to choose from. This problem is so complex that a supercomputer would be required to solve it.

Cao and Lim, then, are developing a new method called the “Advanced Monte Carlo simulation approach,” which will allow any doctor with a graphical processing unit (GPU) to enter in basic information on a patient and receive a detailed analysis on how to deliver the proton therapy to achieve the best possible clinical outcomes.

“We want to try to understand the biological effects of proton beams. Once we have a better understanding of the tissue response to proton beams, then I’m sure we’ll do a much better job with proton therapy, far beyond the current practice of using photon beams,” Cao said.