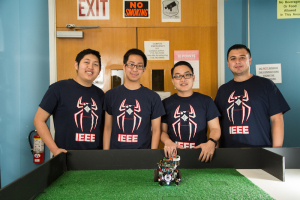 In April, two Institute of Electrical and Electronics Engineers (IEEE) undergraduate robotics teams from the UH Cullen College of Engineering’s electrical and computer engineering (ECE) department competed in the IEEE Region Five Student Robotics Contest in Kansas City, MO. Both teams placed in the competition, which challenged more than 27 teams to build search and rescue robots to complete specific tasks within an allotted timeframe.

The UH Engineering team made of up of undergraduate students Kain Dominguez, Michael Le, Trung Ngo and Phat Nguyen earned second place in the competition. The other UH Engineering team, made up of James Boswell, Gary O’Day and Michael Whatley, earned 12th place.

The students were challenged with creating a robot that could locate and transport four natural disaster victims to care facilities depending on their injuries within six minutes.

“For the competition, the students were building autonomous vehicles that could sense the environment and do intelligent things,” said John Glover, electrical and computer engineering professor and advisor to both robotics teams.

While preparing for the competition, the students learned to embrace the various challenges that arose.

“Our team worked on our robot for anywhere from six to 14 hours a day, and every single day there was a new challenge or problem with the hardware or the software,” said Le.

The team approached each challenge as an opportunity to grow their skills as engineers.

“When we were working on this robot, we weren’t just looking to make a robot that would win the competition, we wanted to challenge ourselves to make the best robot we were capable of making,” said Ngo.

Glover said the most rewarding part of working with the robotics teams was watching the students work through the problems and grow in the process.

“I have high-level discussions with the students about how to tackle problems,” said Glover. “I provide guidance to make sure they are doing things the right way throughout the design process, knowing that when they come out of it they will be better engineers.”

The student teams also presented their projects at the Capstone Design Conference that took place on April 29 at the UH Hilton.