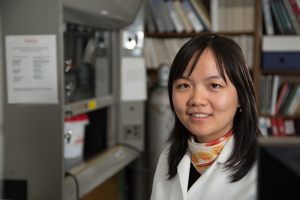 Yandi Hu, assistant professor of civil and environmental engineering at the Cullen College, is collaborating with researchers from the Lawrence Berkeley National Laboratory (LBNL) to explore the use of geologic carbon sequestration to reduce atmospheric carbon dioxide emissions and combat global climate change.

The research project, funded by a four-year Department of Energy (DOE) grant, is led by Donald DePaolo, the director of the Center for Nanoscale Controls on Geologic CO2 at the LBNL. Hu’s other collaborators include Carl Steefel of LBNL, Andrew Stack of the Oak Ridge National Laboratory and Bo Cao, her doctoral student at the Cullen College.

Carbon dioxide, or CO2, is released into the atmosphere by various natural processes, such as biological decay and decomposition, and human activities including deforestation and the burning of oil, natural gas and other fossil fuels. As evidenced by global climate talks and the recent Paris climate agreement, scientists and researchers from around the world are seeking methods to reduce atmospheric CO2 emissions. Hu and her colleagues are investigating how geologic carbon sequestration can be used to reduce the concentration of carbon dioxide in the atmosphere caused by human activity.

Geologic carbon sequestration involves capturing carbon dioxide from coal power plants and injecting it into the earth’s subsurface. Before CO2 can be transported to injection sites it must be converted into a liquid state, which is achieved by applying high levels of pressure to the gas. Once injected underground, the CO2 can be trapped in the subsurface through structural, capillary, solubility and mineral trapping. Hu is researching mineral trapping, which involves the conversion of CO2 into carbonate minerals to permanently store the CO2 in the subsurface.

“In the subsurface brine, there are divalent cations such as calcium, magnesium and iron that can react with the dissolved CO2 to form carbonate minerals like calcite,” she said.

In her lab at the Cullen College, Hu and Cao are using a novel technique, quartz crystal microbalance with dissipation (QCM-D), to quantify the calcite growth rate. The data collected will be used in future large-scale simulations by Steefel and Stack to help predict the time it will take for CO2 to be permanently stored in the subsurface reservoir.

“The Lawrence Berkeley National Lab is a distinguished and high quality research lab, so they have a lot of choices when selecting collaborators,” said Hu. “I think [my collaborators] chose to partner with our college on this project because we offer such unique expertise and capabilities.”

The Center for Nanoscale Controls on Geologic CO2 is one of 32 nationwide Energy Frontier Research Centers (EFRC) implemented by the DOE's Office of Science to encourage partnerships among universities, national labs, nonprofit organizations and for-profit firms. EFRCs provide a platform to accelerate research needed to meet critical energy challenges, according to the Office of Science’s website.