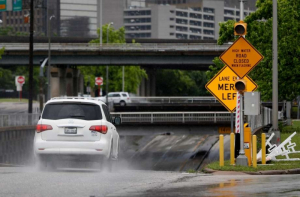 On April 20, the Houston Chronicle featured Gino Lim, chair of the industrial engineering department at the Cullen College, in the article “Officials pledge action after flooded roadway deaths.”

This week, the city of Houston experienced historic flash flooding with areas of the city receiving nearly 18 inches of rain on Monday, April 18. There were eight fatalities during the storm, including three motorists who drove into floodwater.

Lim has been working with Houston city officials to increase drivers’ safety during flash flooding. He developed early warning sensors that have been installed throughout the city in flood-prone areas and is working to install electronic gates at flood-prone underpasses and crossings.

“Sometimes it is very difficult to see the water levels when someone is not used to the area,” Lim said. “Based on what we know, which location was flooded often, we can set the priority and put gates in those locations.”

Following last year’s Memorial Day floods, Houston officials identified 27 locations where warning systems would be installed so drivers could avoid high water. As of this week, warning systems have been installed at 19 of those locations.

The sensors installed throughout the Greater Houston area already feed information to a flood-monitoring database created by Lim in 2010. The information collected by the sensors is fed into algorithms written by Lim that analyze and display the data on real-time, web-based flood maps. The user-friendly flood maps resemble Google maps, and intuitively display information on water levels at specific points throughout Houston.