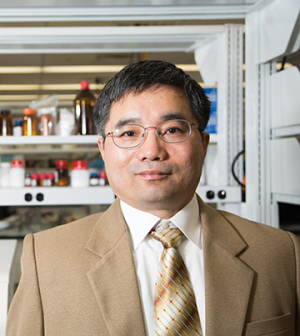 Lupus is a chronic autoimmune disease without a cure and without a highly effective treatment option. Many scientists believe that genetics and environmental factors interact to cause immune cells in the human body to overreact and attack healthy cells and organs in the estimated 1.5 million Americans affected by the disease.

“Over time, 50 to 60 percent of lupus patients end up with renal failure caused by kidney disease, and they also have higher incidents of cardiovascular disease and other health issues,” said Tianfu Wu, assistant professor of biomedical engineering at the UH Cullen College of Engineering. “So it’s a dangerous disease, and we want to find a cure or at least more potent treatments than exist now.”

Wu earned a $300,000 grant from the Lupus Research Institute, LRI, to continue his pursuit of promising preliminary lupus research. He systematically scanned entire proteins inside cells and determined that one molecule called polo-like kinase 1, or PLK1, might contribute to the onset of the disease.

Wu identified three goals for his LRI grant. First, he intends to uncover a molecular basis for the immune cells that express PLK1 as well as signature pathways used by PLK1 to regulate upstream and downstream molecules. Next, he aims to determine whether or not PLK1 is an effective therapeutic target for treatment of lupus in animal models. Lastly, Wu plans to collaborate with the UT Health Science Center in the Texas Medical Center to translate results found in animal models to human patients.

During the last 50 years, the FDA has approved only one drug, Benlysta, for the specific treatment of lupus. However, in randomized, double-blind, placebo-controlled clinical trials, the patients who received this drug showed only slightly better results than the patients who received the placebo. Other lupus treatments, such as steroids and antimalarial drugs, were not originally designed to treat the disease, but suppress immune responses and inflammation. Unfortunately, they can also cause a host of problematic side effects with prolonged use.

“Hopefully this LRI-funded research will advance our understanding of the pathogenesis of lupus,” Wu said. “And the blockade of PLK1 could become a novel and effective strategy in conquering this devastating disease.”