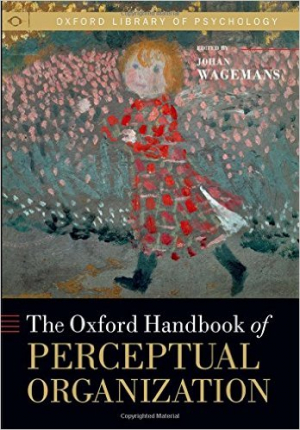 The editor of The Oxford Handbook of Perceptual Organization invited Haluk Ogmen, professor of electrical and computer engineering at UH Cullen College of Engineering, and his colleague Michael Herzog, professor of psychophysics at the Ecole Polytechnique Fédérale de Lausanne (EPFL) Brain Mind Institute in Switzerland, to contribute a chapter on apparent motion and reference frames.

The reference book, which published earlier this year, compiles the entire scope of perceptual organization research into 10 sections of one comprehensive volume. Published by Oxford University Press, which dates back to 1478, the book is part of a series of prestigious handbooks that includes scholarly reviews on 14 different subjects composed by foremost experts in their fields.

“Oxford Handbooks are among the most respected, authoritative reference books in the world, especially in the area of cognitive science,” Ogmen said. “It was an honor to be asked to contribute a chapter.”

Ogmen and Herzog’s collaborative overview of motion perception research begins about 450 B.C. with ancient philosopher Zeno’s concept that physical motion is an illusion created in the mind. The authors follow a timeline of important philosophical and psychological theories, ending the chapter with contemporary neuroscience studies, including their own two-stage theory of reference frame construction.

In the 1970s, Gunnar Johansson, a Swedish psychophysicist, explored principles of Gestalt psychology, the study of human integration and organization of perceptual information into meaningful wholes. In one study, he attached less than a dozen points of light to the limbs of a dancer and placed the dancer in a completely dark environment. While the dancer stood stationary in the darkness, subjects were asked to share their perceptions of the points of light, but they could not determine a cohesive meaning. As soon as the dancer began to move, the subjects understood that the lights were attached to a person performing a dance.

Without prior information, a computer cannot determine a cohesive meaning for the lights while they are stationary or moving. Researchers are exploring the human visual system to understand engineering principles behind receiving, processing and perceiving information that could contribute to efforts to reverse-engineer the human brain, one of 14 U.S. National Academy of Engineering grand challenges for the 21st century.

“Computers can exceed some human capabilities, such as computing large sums quickly, but their vision is very poor compared to ours,” Ogmen said. “Through evolution, nature developed ingenious solutions, but little is understood about the computational principles underlying these solutions.”

In a famous study, Zeno analyzed how an object can be in motion. During a time when modern principles of mathematics and physics were not yet developed, the philosopher reasoned that motion was a psychological construct created in the mind rather than a physical phenomenon.

He thought that a moving object would take an infinite amount of time to traverse infinitely many points between its origin and its destination, which would be impossible during a finite amount of time. Therefore, he theorized that objects existed in different positions in space at infinitely short instants, and that the brain stored these percepts as memories and compared them over time to maintain the consistency of the environment. Movies are modern-day examples of apparent motion. By playing individual film frames rapidly back to back, motion is created on screen in the minds of movie viewers, though motion is not actually occurring.

Later, mathematicians developed the concept of convergent series, the addition of infinitely many quantities resulting in a finite sum, which showed that physical motion was possible. Motion played a fundamental role in the emergence of both Newtonian and Einsteinian physics. Particularly, the relativity of motion and reference frames are core concepts of Einsteinian physics, and ways those concepts work in the brain and mind constitute a significant part of Ogmen’s research.

“Although brain science was mostly philosophical in ancient times, and Zeno was wrong about the physics side, he was correct that the brain could create motion when it did not exist,” Ogmen said. “However, a full appreciation of how the brain creates motion when it does not exist had to wait until 19th century.”

The chapter covers psychological theories of apparent and real motion that emerged with the work of Sigmund Exner and Max Wertheimer during the late 19th and early 20th centuries, which led to the development of Gestalt psychology. After the discovery of apparent motion with relatively simple stimuli, researchers started to investigate more complex stimulus configurations wherein multiple objects and object parts move simultaneously. In order to explain human perception of these complex motion patterns, they needed to establish coordinate systems, or reference frames, used in the brain to compute motion. Coordinate systems and reference frames also have a long history in science.

In 1929, Karl Duncker, Gestalt psychologist, conducted an experiment that emphasized the importance of reference frames in motion perception. He required subjects to indicate their percepts while observing slight movements of a rectangle around a stationary point. Most of the subjects observed the point moving rather than the rectangle, and Duncker coined the illusion as induced motion. Scientists continue to study the phenomenon to understand how and why the brain selects particular reference frames.

“We’re trying to understand the processes of motion perception in the visual system to create engineering products that not only imitate biological systems, but improve upon them,” Ogmen said.

For the last decade, Ogmen, Herzog, and their students have studied ways the visual system selects reference frames. They published about 30 peer-reviewed journal articles, which culminated in a two-stage theory of reference frame construction. According to their theory, the first stage consists of detection and grouping of motion vectors, which determines the appropriate reference frames in different parts of the visual field. The second stage computes relative motions within these fields based on each reference frame, and the computations achieved during the second stage give rise to perceptual experience. Their more recent studies, conducted with electroencephalogram (EEG) and functional magnetic resonance imaging (fMRI) techniques, have provided evidence for their theory and pointed to potential neural correlates underlying the computations.

“Most biological systems, including the human visual system, devote extensive neural processing resources to motion analysis,” Ogmen said. “In fact, in the brain, motion is not derived indirectly from other perceptual dimensions, rather, it is a fundamental dimension of our visual system. Understanding how this fundamental dimension leads to the construction of ecologically valid representations of our environment is key in reverse-engineering the brain.”