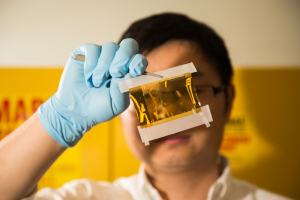 The award honors young scientists who have contributed outstanding theoretical and experimental work in an area related to thin films. Yu received the award for his significant contribution in the areas of flexible, stretchable and wearable electronics.

“I’m very honored and grateful to receive this award,” Yu said. “I feel like it is a vote of confidence for my research. This award will spur me to work harder to make more contributions to the scientific community.”

Thin films are commonly used in electronic semiconductors and optical coatings, such as the metal coating placed on glass to create a reflective mirror. Now, researchers across the world are racing to perfect a new application for thin films: stretchable, bendable and wearable electronics.

Yu was among the group of researchers to first begin developing flexible, stretchable and wearable electronics – an endeavor that began in 2007 while he was earning his Ph.D. in mechanical engineering from Arizona State University.

In order to move away from the hard, bulky electronic components of modern computers, such as silicon chips and circuit boards, Yu developed a novel, ultrathin silicon devices printed onto soft, polymer substrates. Yu’s thin film electronics are only 1 micron thick – about 50 times thinner than a single strand of human hair. One of the goals of his research group is to develop thin, bendable and stretchable electronics with an electrical performance equal to current hard electronics.

Since 2009, Yu has published more than 20 articles in major scientific journals about his thin film based flexible, stretchable and wearable electronics.

“We want these wearable electronics to be everything-in-one. We want them to power other electronics, such as your cell phone or iPad, but we have also integrated them with sensors so that they can monitor the users’ overall health and internal processes and display that information in a very user-friendly way,” Yu said.

The eventual goal, Yu said, is to take these ideas out of the laboratory and into the consumer market.

“It’s an extremely exciting area to be working in,” Yu said. “The wearable electronics we’re developing can be commercialized and brought to market in the near future.”

For Yu, seeing a technology he developed make a real impact on peoples’ lives would be a dream come true.

“For researchers and professors, one of the goals is to see their research have real impact. That’s why I chose this area in particular – this can make a real difference and have a real application in everyday life. My students and I are all excited about this” Yu said.

Yu earned his B.S. in mechanical engineering and M.S. in electrical engineering from Southeast University in China. Prior to joining the UH Cullen College of Engineering faculty in October of 2013, Yu was a post-doctoral researcher in the materials science and engineering department at the University of Illinois, Urbana-Champaign.

The Paul H. Holloway award is named after the University of Florida professor who has a distinguished and continuing career of scholarship and service to AVS.