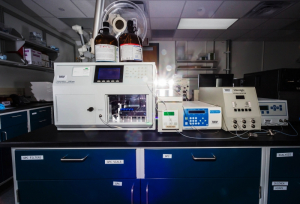 Finding improved methods for drug delivery is a hot topic among researchers all over the world. One method in particular, which utilizes polymeric micelles to carry and deliver drug molecules to their intended targets inside of the body, has had very promising results in recent years.

Now, an engineering professor at the UH Cullen College of Engineering is uncovering the fundamental science of using block copolymer micelles for drug delivery with a three-year, $165,000 award from the National Science Foundation.

Megan Robertson, assistant professor of chemical and biomolecular engineering, is examining how drug molecules interact with polymers within a micelle and quantifying how these interactions change the structure of the micelle as well as the release of the drug inside of the body.

“If we understand the effect of the drug on the micelle structure, dynamics, and release rate, it will help us to design new and improved micelle systems,” Robertson said.

Her team will begin by studying Doxorubicin, a chemotherapy drug, but the results from this research could be generalized to other drugs, Robertson said.

Robertson’s research collaborator is Louis Madsen, an associate professor in the department of chemistry at Virginia Tech. Madsen is an expert on NMR (nuclear magnetic resonance) spectroscopy, a technique used to determine the structure of organic compounds, atoms and molecules. One of Robertson’s areas of expertise is neutron scattering, an experimental technique used to investigate the nanometer to sub-micron scale structure of materials.

In this project, Robertson and Madsen are combining NMR and neutron scattering techniques to further investigate the use of block copolymer micelles for drug delivery. “I think we can learn more about this system by using a combination of these techniques rather than by one technique alone.”

To understand micelles, think about the behavior of a detergent added to a bucket of water: the detergent molecules aggregate together, forming  a type of micelle. Molecules like detergents form micelles because they are composed of two parts: one part is hydrophobic (water-hating) and the other is hydrophilic (water-loving). The micelle aggregate keeps the hydrophobic part separate from the water, while the hydrophilic part is surrounded by water.

When used for drug delivery purposes, drug molecules are stored inside the hydrophobic core of the micelle, and then released in the vicinity of the target, such as a tumor. This can increase the drug’s efficiency and, in some cases, decrease the number and severity of side effects caused by the drug.

One example is chemotherapy drugs, which wreak havoc on the patient’s entire body in order to deliver toxic agents to a tumor site. If researchers can find drug delivery systems that guarantee that the chemotherapy drug will be released only at the site of the tumor, the drug would be more effective at killing the tumor cells and the cancer patient would experience far less side effects as a result of the medication.

One tricky part of using micelles for drug delivery, however, is achieving the desired micelle structure, which can contain a spherical core, a cylindrical core, or even adopt a vesicle morphology (vesicles are capsules that contain a water-filled hydrophilic core surrounded by a hydrophobic membrane or shell). Furthermore, in some cases the polymers themselves transfer from one micelle to another, through a process called single chain exchange. Robertson and Madsen will identify the micelle structure and examine the rate of single chain exchange.

With the completion of this project, researchers will have a model of how drug molecules can change the structure and dynamics of micelles, as well as the timed release of drugs within the micelle’s core. This knowledge will enable the design of new and improved drug delivery materials.