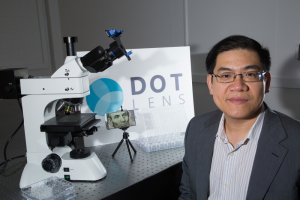 A professor in the UH Cullen College of Engineering received the National Science Foundation’s (NSF) Innovation Corps (I-Corps) award with a project titled “DotLens Smartphone Microscopy.” This grant will provide his team with seed funding and guidance to take one of their innovative ideas out of the laboratory and pursue commercialization. This invention was one of the three research highlights in the UH Chancellor Renu Khator's report to the Board of Regents last August.

Wei-Chuan Shih, associate professor of electrical and computer engineering, and his Ph.D. student, Yulu Sung, said they stumbled upon their invention “by accident.” The engineers were experimenting with polydimethylsiloxane (PDMS) to look for new uses for the material, which is most commonly used in soft lithography and microfluidics.

One day, a few droplets of PDMS spilled onto a hot plate in the laboratory. After it had cooled, Sung picked up the material and commented that it looked like a lens.

“Using PDMS as a lens material was certainly on our radar, but, we didn’t set out to make a lens for a smartphone camera. As soon as we put it on the camera, which was not obvious in the first place, we realized this is something extraordinary,” Shih said.

Upon further examination, Shih and Sung discovered that the lens can magnify microscopic objects by as many as 120 times when placed over a smartphone’s camera – and all for the raw material cost of 3 cents per lens.

The low cost and ease of using the lens make it ideal for researchers working in the field or for students in the classroom. It also could have clinical applications, allowing small or isolated clinics to share images with specialists located elsewhere.

“But ultimately, the application is only limited by one’s imagination,” Shih said.

Soon after a UH press release about the smartphone microscope lens went out, Shih said that his research team was unable to keep up with the flood of requests for lenses.

“I learned very quickly that to research or collaborate in a laboratory is a very different thing than to commercialize the research.” Shih said. "This is exactly why the I-CORPs program is so great for researchers. It’s a totally different kind of thing. It’s not in my blood, and it’s a totally new kind of training. We get to actually work as we learn and learn as we work."

The goal of the NSF I-CORPs program, according to the NSF website, is to prepare scientists and engineers to extend their focus beyond the laboratory and broaden the impact of their NSF-funded research projects. I-CORPs teams are required to identify a principal investigator, an entrepreneurial lead and an industry mentor.

The UH I-CORPs team consists of Shih and Sung as the principal investigator and entrepreneurial lead, respectively. They recruited Ken Jones, director of the Wolff Center for Entrepreneurship at the UH Bauer College of Business, as their industry mentor.

“Ken is a highly successful entrepreneur with years of experience in building businesses. I feel that we are really fortunate to have him onboard,” Shih said.

In addition to Jones, Shih said other previous I-CORPs award recipients from the Cullen College served as invaluable mentors to his team.

“I’d like to thank my colleagues Drs. Richard Willson, Bala Raja, and Debora Rodrigues for sharing their experience with me as previous awardees,” Shih added.

The team’s journey will officially kick off this October when they travel to Ann Arbor, Michigan to attend an entrepreneurial boot camp consisting of workshops, training sessions and meetings with future customers and potential competitors. By the end of the six-week program, the team is required to accumulate at least 75 contact hours with potential customers.

Shih said the UH I-CORPs team hopes to explore the education market first. After presenting the research at workshops for science teachers last summer, the team received an overwhelming response from educators hoping to incorporate the lenses into their classrooms.

“Matthew Wells, president of the Science Teacher Association of Texas, told me that every science teacher should have one. That was among the most exciting comments,” Shih recalled.

Dr. Katherine Garcia, program coordinator of Alief Independent School District, has set out a plan to integrate the lenses in a nine-week study across several 7th-9th grade classrooms.

"We think these lenses could have a really big impact in K-12 STEM [science, technology, engineering and mathematics] education," he said. "We all care about impact, and if we can actually enhance STEM education in K-12, then there is nothing better than that."

Beyond making the right contacts in the industry and identifying distribution channels, Shih said another potential obstacle is identifying a manufacturing facility for mass production. Although the raw material to make the lenses is relatively cheap, streamlining the manufacturing and packaging processes is essential to managing the overall cost. Shih has been proactively seeking business advice and partnerships in this area.

“I will present it to the UH Board of Visitors next week, where my mission is to make a pitch in front of a group of highly esteemed members and community leaders,” Shih said.

Regardless of whether the team's company thrives after the intensive I-CORPs training, Shih said the group is determined to see the lenses make a positive impact in classrooms all over the world.

"We want success, but we treasure the learning process first before whether the company is successful or not. We want education to be the first application of these lenses because, no matter what, this can generate impact in kids’ education," Shih said. "That's going to happen no matter what."