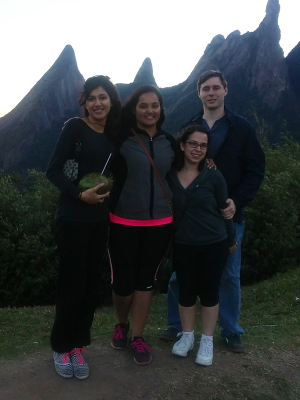 This summer, three Cullen College of Engineering students and one alumnus boarded a plane bound for Brazil for the third annual Society of Women Engineers (SWE) “One Day in Engineering” outreach event. Held in the city of Teresopolis and nearby rural areas, the event aims to inspire excitement about STEM (science, technology, engineering and math) fields and encourage local high school students to pursue higher education.

This year, the event’s founder, mechanical engineering graduate student Gabriela Bernardes, was joined by fellow SWE members Mah-rukh Muhammad and Debjani Chakravarty and mechanical engineering alumnus Ben Richardson. Bernardes, who came to the University of Houston from Brazil, originally founded the event in conjunction with her grandmother’s social project, Nadir Furtado. In preparation for the trip, members of SWE’s Houston student chapter collaborated with Nadir Furtado to plan travel and event logistics. While SWE members developed workshops for the event, Nadir Furtado coordinated local volunteers, booked venues and connected with Brazilian high schools to get the word out about “One Day in Engineering.”

The two-day event on August 15th and 16th introduced over 100 students from more than 11 high schools to an array of engineering principles through hands-on workshops, activities and games. Students were divided into small groups and rotated between workshops on civil, chemical, mechanical and electrical engineering.

In the civil engineering workshops, led by civil engineering student Muhammad, students designed and built structures out of lightweight materials such as straws and tape. Muhammad then applied weights to the seemingly flimsy structures to test their strength. Students were amazed by how strong the structures could be when triangles were incorporated into the design, she said.

Muhammad added that the most exciting part for her was seeing the students explore their creativity through the design process. “It isn’t easy at first to get into the engineering mind frame, figuring out how to be creative and coming up with something on your own…but once they got into it, once it clicked, they just kept going and building really fast,” she said.

Muhammed said she was impressed by the students’ overall engagement. “I felt that the kids were very open to learning and new ideas. It was a good experience. They were very interested,” she said.

The interest even extended beyond the workshops with several students asking about college life, said Chakravarty. Between workshops, she was able to answer questions about scholarships, SWE and her experience at the University of Houston. “Helping men and women understand their potential and actually take initiative, like we’re taking initiative to do something for their community…for me, that was probably the greatest part,” she said.

Bernardes said seeing the impact the event has had on the Teresopolis community is the biggest reward. Some of Bernardes’ family members who live in Teresopolis said that children in their community have pursued engineering in college after attending the event. Bernardes added that several former participants also attended this year’s event to volunteer as translators and facilitators.

For both Muhammed and Chakravarty, who had never visited Brazil before this event, the biggest takeaway from their experience was bonding with the students and the community. “Even though we didn’t speak the language, [working with international students] gives you an overwhelming view that we’re all the same,” said Chakravarty.

Muhammed added that the experience reinforced the interdisciplinary nature of engineering. “[At first] it seems like everyone’s so different, but once we’re all working together toward a common goal, we form a team to get things done,” she said.