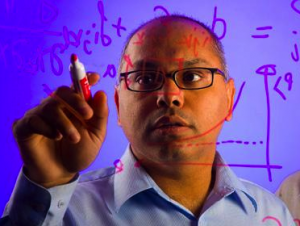 Pradeep Sharma, M.D. Anderson Chair Professor and chair of the mechanical engineering department at the UH Cullen College of Engineering, received the 2015 Melville Medal from the American Society of Mechanical Engineers (ASME). The Melville Medal is the highest ASME honor for the best original paper published in a two-year period in any of the 28 ASME journals.

Sharma received the Melville Medal for his paper titled “A theory of flexoelectric membranes and effective properties of heterogeneous membranes,” which was published in the Journal of Applied Mechanics in January 2014. His co-authors on this paper are Parnia Mohammadi, Sharma’s former Ph.D. student, and Liping Liu, professor of mechanics, materials and mathematics at the Rutgers University.

Formal presentation of the award will take place at the 2015 International Mechanical Engineering Congress and Exposition held from Nov. 13-19 in Quebec, Canada.

Flexoelectricity is a phenomenon whereby certain materials produce electricity when bent, stretched, or otherwise exposed to mechanical strain. Although flexoelectric qualities have been observed in many materials over the years, there was no mathematical framework to explain how it worked in two-dimensional materials such as biological membranes or graphene.

Sharma and his collaborators developed the first-ever mathematical model to describe flexoelectricity in 2-D materials, providing a framework for understanding how a material’s mechanical behavior is linked to its electrical behavior.

“The mathematical theory we created has all kinds of interesting applications,” Sharma said. “There’s an entire class of 2-D materials that have become very important to us technologically, and our model can be used for many applications that will not show up until much later on.”

Examples of two-dimensional materials include graphene and molybdenum disulphide, both of which are just one atom thick, Sharma said. The membranes surrounding human biological cells are also a type of 2-D material, he added.

The mathematical model developed by Sharma and his collaborators can be used to further understand biological membranes, such as those responsible for hearing. “In order for our hearing mechanism to work, the membranes of ear hair cells must convert mechanical motion into an electrical signal,” Sharma said. His post-doctoral researchers and a Ph.D. student are currently applying the mathematical theory to understand the human hearing mechanism.

Sharma also detailed potential future applications of the mathematical model, including energy harvesting. For example, the motion of a heartbeat could someday be converted into electrical power and used to power a nanosensor or an implanted pacemaker.

In the year since the research was published, the paper has been cited more than 10 times, but Sharma believes the mathematical model his team developed will be relevant to researchers for many years to come. “We anticipate many future applications,” Sharma said.