Researchers are gaining momentum with adoptive cell therapy (ACT), a type of immunotherapy that uses the patients’ native or genetically modified immune cells to attack diseases such as cancer and chronic infection.

In fact, a team of Universtiy of Houston researchers, in collaboration with M.D. Anderson Cancer Center physicians and scientists, recently identified attributes of those immune cells that could help researchers to optimize cell designs for improved mediation of tumor regression in leukemia patients.

Ivan Liadi, UH Cullen College chemical and biomolecular engineering graduate student, was lead author on a paper that published in the May edition of Cancer Immunology Research, a journal of the American Association for Cancer Research. He utilized Timelapse Imaging Microscopy in Nanogrid Wells (TIMING), a novel technique developed in the UH Single-cell Lab, to examine the functional efficacy of chimeric antigen receptor-modified T cell (CAR+ T cell) in killing of tumor cells in vitro.

"We anticipate that TIMING may be used to rapidly determine the potency of T-cell populations and may facilitate the design and manufacture of next-generation CAR+ T cells with improved efficacy," Liadi wrote in the journal paper. 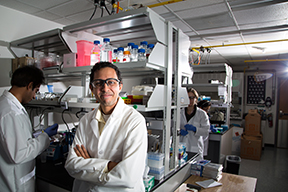 The research was also conducted by Navin Varadarajan, UH professor of chemical and biomolecular engineering, Badri Roysam, UH department chair and professor of electrical and computer engineering, and Gabrielle Romain, UH postdoctoral fellow, among other scholars.

"The Single-cell Lab at the University of Houston aims to pioneer single cell methodologies with an eye on translation," Liadi said. "We’ve tried to look at the bigger picture in order to optimize and expand the methodology, either with applications into different immune cells or into the realm of dynamic imaging."

World-renowned immunotherapy expert Carl H. June referenced the UH study in his Cancer Immunology Research commentary that published this month. June, a professor of immunotherapy at the University of Pennsylvania, indicated that one of the strengths unique to Liadi’s study was his use of CAR+ T cells already in use in clinical trials.

One of the challenges of CAR+ based immunotherapy is identification of specific antigens present on target cells by immune cells with minimal off-target toxicity. In the context of leukemia, approximately 95 percent of malignant B cells express CD19 surface markers, making them highly attractive targets for CAR+ based immunotherapy.

Read the study by UH engineers and the commentary by Carl June that published in Cancer Immunology Research.

When a mosquito begins to nibble on you, it is not merely feeding on your blood, it is also injecting its saliva into your skin. If that saliva happens to be full of parasites carrying malaria or other diseases from its last victim, then most likely you will become infected, too.

The Cullen College of Engineering at the University of Houston and Dr. Joseph W. Tedesco, Ph.D., P.E., the Elizabeth D. Rockwell Endowed Chair and Dean, are pleased to share the 2020-21 Faculty and Student Excellence Award winners.

The initial announcement was made during the virtual Spring 2021 State of the College Address on May 4.