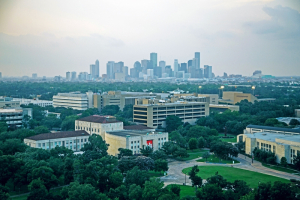 The UH Cullen College of Engineering continues its tradition of providing innovative and industry-relevant academic programs by officially announcing the approval of two new Ph.D. programs: one in geosensing systems engineering and the other in petroleum engineering. Both doctoral programs were established in response to industry workforce needs and received tremendous industry support.

NCALM’s roots trace back to 1996 at the University of Florida. It was there that Ramesh Shrestha, NCALM director and Hugh Roy and Lillie Cranz Cullen Distinguished Professor of civil and environmental engineering, and NCALM chief scientist Bill Carter first began working with the center’s core technology, Light Detection and Ranging, or LiDAR. With LiDAR, researchers fly a plane over an area they want to map, shooting hundreds of thousand of laser bursts per second at the ground. How that light returns to its source can be used to create extremely detailed topographical maps, even through dense vegetation and murky water.

Over the years, such maps have proven valuable to researchers in a number of disciplines. NCALM, in response, has dedicated itself to being a resource for outside investigators as well as a home to basic and applied research. Roughly 40 NSF-funded principle investigators have conducted research with data delivered by the center. Under a special seed program, it has provided data and maps that have been used in approximately 80 M.S. and Ph.D. students in their theses and dissertations; and hundreds of peer reviewed articles that utilized NCALM observations have been published, including featured articles in Nature, Physics Today and Science.

The move to UH set the stage for the creation of a multidisciplinary master’s degree program in geosensing systems engineering and sciences in 2010 – the first and only graduate program of its kind in the world. Shrestha said as the geospatial technology sector continues to grow rapidly, so does the demand for scientists who are trained to use these technologies. “That’s why we knew we had to develop a doctoral program,” Shrestha said. “We developed the Ph.D. program in direct response to these industry trends.”

Doctoral students pursuing a geosensing systems engineering and sciences degree will have access to hands-on training and research at NCALM in addition to being taught by the world’s leading experts on airborne laser mapping. Shrestha said doctoral students will be expected to prepare proposals for private and government agencies for financial support for their own research projects.

In 2009, the UH Cullen College of Engineering introduced its revived undergraduate program in petroleum engineering as a means of counteracting the critical shortage of talent needed to replace the energy industry’s aging workforce. The petroleum engineering bachelor’s program was launched with significant support from local industry, and in just five short years, enrollment in the program exploded from 20 students in 2009 to over 800 students in 2014.

In Houston, the Energy Capital of the World, the energy industry impacts about 50 percent of the economy, and 40 out of the 145 largest publicly traded oil and gas firms are headquartered here. Many energy industry leaders serve on the Cullen College’s petroleum engineering advisory board, offering advice to the college on its academic and research programs and helping to design curriculums that address the realities of the modern petroleum sector. Many of Houston’s energy leaders also offer formal advice on shaping energy-related curriculums at the University-level by serving as members of UH’s Energy Advisory Board.

Holley said that because of the program’s location at ERP as well as the university’s proximity to the energy industry’s largest players, doctoral students will have unique opportunities for research and employment that students living in any other city in the U.S. would not have. This was certainly the case for the revived bachelor’s degree program in petroleum engineering, which was lauded by the Business-Higher Education Forum as a model partnership between industry and academia.

To learn more about the Ph.D. program in petroleum engineering, please visit: http://www.petro.uh.edu/graduate/degree-programs/phd.