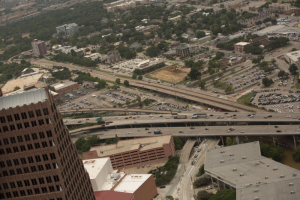 An investigative reporter with Houston’s Channel 2 News tapped into ongoing research at the UH Cullen College of Engineering aimed at improving aging infrastructures across the U.S.

The research, which is led by civil and environmental engineering professor Abdeldjelil “DJ” Belarbi, looks at using plastic instead of steel within concrete bridge girders. Girders are the beams that support the weight of the bridge, and because the girders are made of steel, corrosion has become a huge problem for bridges and other infrastructures across the nation.

In fact, Belarbi calls it the cancer of bridges.

Belarbi and a team of Cullen College students have found that using carbon fiber reinforced polymers, or CFRPs, instead of steel in bridge girders would vastly reduce the corrosion of the girders.

"Corrosion is a problem, and this material has proven to be very good material for such situations," Belarbi told Channel 2 reporters.

According to the Federal Highway Administration, 260 bridges in the Houston metropolitan area are considered potentially structurally deficient and will need to be watched in case repairs are needed. The American Society for Civil Engineers reports that 1 in 9 bridges across the U.S. are structurally deficient.

Read the full article and watch the video from Channel 2 News about Belarbi’s research at: http://www.click2houston.com/news/investigates/could-plastic-replace-steel-in-bridges/32384918.