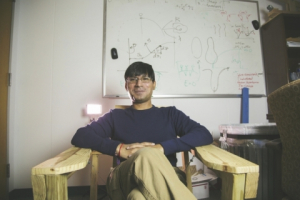 Ashutosh Agrawal, assistant professor of mechanical engineering at the UH Cullen College of Engineering, has published a paper in the Proceedings of the National Academy of Sciences (PNAS) that provides unprecedented fundamental insight into the role of key proteins in regulating cellular transport in different mechanical environments.

When extracellular cargo reaches the cell’s membrane, it is recognized by receptors that initiate a signaling cascade to remodel the membrane locally. Depending on the cell type and its mechanical environment, an elaborate set of proteins is engaged to work together to form an invagination, or vesicle, in the membrane. The cargo sits inside the vesicle and is completely enveloped by the membrane. Eventually, the piece of membrane surrounding the cargo forms a mature vesicle that snaps off and detaches from the rest of the cell’s membrane. The closed, cargo-carrying vesicle is then free to travel to its destination inside of the cell.

One of such mechanisms, known as clathrin-mediated endocytosis (CME), is the key metabolic pathway for transporting molecules into cells that are required for many critical functions, including nutrition and communication between cells.

In mammalian cells, the formation of vesicles during this process is primarily driven by clathrin, a membrane-bending protein. In contrast, the formation of cargo-carrying vesicles in yeast cells involves clathrin, actin and BAR proteins that contribute to vesicle formation in different capacities. Experimental studies have shown that an increase in cellular tension in the plasma membrane necessitates the use of actin and BAR proteins in driving vesicle growth.

Although scientists have long known that the actin and BAR proteins are active players in the formation of cargo-carrying vesicles in a high membrane tension environment, their specific roles in the process have heretofore remained a mystery. That is, until Agrawal and his students at the Cullen College began investigating the role these proteins play in yeast cells.

In order to investigate this phenomenon, Agrawal and his team developed models to help predict and explain the shapes of vesicles that form when only actin proteins are driving the growth of cargo-carrying vesicles. Using these models, his team found that the formation of these vesicles is a relatively smooth and stable process until a critical amount of force is reached.

“Once the critical force is crossed, the vesicle undergoes a snap-through transition that drastically elongates and squeezes the vesicle,” Agrawal said. That such a mechanism could be at play during CME was not known earlier.

The next step was to develop a model for the effect of BAR proteins on the formation of vesicles. Agrawal’s team found that in contrast with the rapid shape transition that took place during vesicle formation using only actin proteins, the BAR-driven vesicle formation was a gradual and controlled process.

“Basically, what we saw was that the actin provides a big push towards forming the vesicle, and right when the vesicle gets close to the critical point, the BAR proteins gently tip the system over and leave, letting the cargo-carrying vesicle undergo instability-driven growth,” Agrawal said. “What this means is that the actin proteins are the driving force behind membrane deformation and vesicle formation, with BAR proteins acting as facilitators in this process.”

This interplay of actin and BAR proteins that drives membrane deformation during the CME process could also be at play in many other shape-transforming processes in cells, Agrawal added. More research is needed in order to determine whether protein-induced instabilities are at play in other cellular processes, but Agrawal’s PNAS article certainly lays the groundwork for future studies on this topic. Furthermore, how the mechanical state of the cell and it’s surrounding tissue is affected during various diseases and how it affects cellular transport, is yet to be explored.

“Further research into these lingering questions could eventually lead to improved drug delivery,” Agrawal said. “This is one major area worth investigating based on the fundamental groundwork we have laid out in this paper.”