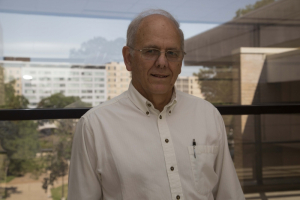 Don Wilton, professor emeritus of electrical and computer engineering, has been named the recipient of the 2015 Technical Field Award in Electromagnetics from the Institute of Electrical and Electronics Engineers (IEEE). Only 35 technical field awards are named by the IEEE each year. Wilton was cited as a winner for his outstanding and fundamental contributions to integral equation methods in computational electromagnetics.

Wilton will receive a bronze medal and certificate. He already has made arrangements to donate the associated honorarium to the fund created at his retirement to provide travel support for UH graduate electromagnetic students to attend professional meetings.

Wilton received his B.S., M.S., and Ph.D. degrees from the University of Illinois, Urbana-Champaign, in 1964, 1966, and 1970, respectively. Wilton joined the UH Cullen College of Engineering as a professor of electrical engineering in 1983, a position he would hold for the duration of his tenure at UH. From 1970 to 1983, he was with the department of electrical engineering at the University of Mississippi, and from 1965 to 1968 he was with Hughes Aircraft Company, engaged in the analysis and design of phased array antennas.

Wilton is well known for establishing a framework for using computer modeling to study electromagnetic scattering by irregular surfaces, such as the curved wing of an airplane. The primary article he and his research team wrote on this subject, “Electromagnetic Scattering by Surfaces of Arbitrary Shape,” was published in 1982 and has since been cited more than 3,000 times.

Wilton’s research on computational electromagnetics established a number of important fundamentals for the entire field, including methods for modeling wires, cylinders and bodies of revolution. In 1996, Wilton published a paper explaining and clarifying how best to use the method of moments, which is one of the oldest computational methods used to solve linear partial differential equations.