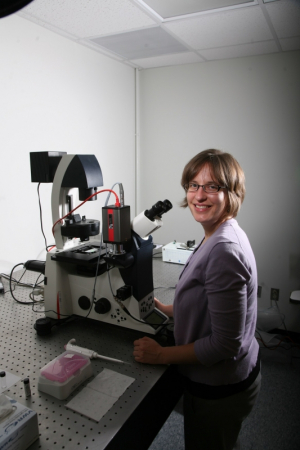 The latest developments in three-dimensional printing technology are opening doors to advances in research fields like medicine, computing and electronics. But while these advances are promising, the feedstocks used in 3-d printing are still mostly limited to simple polymers, which are great for constructing trinkets and demo devices but not as useful when looking to create complex circuit boards or flexible, bendable wiring.

Jacinta Conrad, assistant professor of chemical and biomolecular engineering, is doing her part to change that and more. Conrad just received a three-year, $299,479 grant from the National Science Foundation (NSF) to study the role of attractions in modifying the confined flow of colloids. Simply put, she and her research team are hoping to discover how to design better materials for applications like 3-d printing – and beyond.

“The goal here is to try to extend printing feedstocks beyond simple polymers toward functional materials,” Conrad said. Adding micro- or nano-sized colloidal particles to feedstocks is one simple way to obtain this additional functionality. A big issue she and her team are facing is one of traffic jams. For example, if they are looking to print a conductive end product, such as a wire, they will add conductive particles to the ink. However, the particles can jam up the narrow flow channels and clog the printhead.

“What the polymers want is the most free space to move in, but they can only get so close to the big particles because they’re not infinitesimally small. Around each big particle is an excluded volume shell into which the polymers can’t penetrate. When the big particles are far apart, these shells don’t overlap. When the particles are close together, the shells overlap and the polymers get back some of the free volume (called an entropic depletion interaction). This attraction is useful as a model because its range is tuned by controlling the size of the polymers. Then, the strength is controlled by the concentration.”

Perhaps even more impressive is that while Conrad will spearhead the work, the preliminary research was conducted by chemical engineering Ph.D. student Rahul Pandey. “Rahul took preliminary data on larger channels and larger particles to show that making particles ‘sticky’ reduced one of the mechanisms that changed density during flow,” Conrad said.

“Particles in flow typically want to consolidate, but consolidation is bad and causes jams, and also won’t allow you to have a connected network of particles,” she explained. “Rahul showed that by slightly tuning the interparticle attractions, you can mitigate some of the mechanisms that lead to consolidation. That’s the preliminary work that underlies this proposal. For printing, we can’t make these attractions too strong (because the particles get too sticky and behave like a solid) and we can’t make it too weak (because the particles jam), and so that’s what we’re going to study through this proposal: how strong is enough to suppress consolidation but not jam the flow completely?”

Part of Conrad’s NSF grant includes outreach efforts as well. She and her research team partner with several college- and university-level initiatives, including G.R.A.D.E. Camp, STEP Forward Camp, Mars Rover and the NSF-sponsored Research Experience for Teachers (RET), to introduce students to materials engineering. While Conrad’s main focus remains her suspension flow experiments, she said outreach holds a special place in her heart.

“My transformative experience was a summer research camp I went to when I was in high school,” she said. The camp was the Research Science Institute, a highly competitive research experience for high school students around the country. “It was working in a lab and being surrounded by smart and motivated students. I really believe in the transformative power of these kinds of experiences… It’s not just about being able to do science, it’s about being surrounded by people who are excited about doing science.”

With programs for younger students like G.R.A.D.E. Camp, Conrad introduces the concepts of suspension flow with oobleck, a cornstarch and water mixture that forms a non-Newtonian fluid with flow properties different than simple fluids. Although it is a liquid when flowed slowly, when the mixture is flowed rapidly it behaves like a solid.

“To effectively reach out to students, you have to target a number of different interaction and learning styles. So my biggest thrill is when initially students are very reluctant to play with these materials but become excited and engaged after touching and experimenting,” Conrad said.  “I’ve had students who originally say ‘I don’t want to do that, I don’t want to get messy,’ and then to see them covered in corn starch with pink hands is just amazing. They get super excited and they ask if they can take [the oobleck] home. It’s fantastic, and this is why I love what I do.”

Even though oobleck is just cornstarch and water, Conrad said it bridges a gap that gets students interested in the field of materials science. “Being able to physically touch materials helps students see there are some really surprising aspects. This is an advantage of having work that is very tactile, where you can show examples. You hope that it gets them excited about engineering. That’s one of the best parts about outreach.”