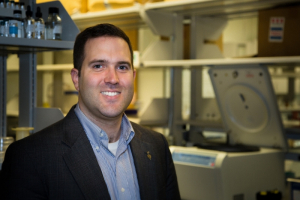 Zeolites play an important role in your day to day life. These crystalline materials are used as adsorbents and catalysts in a variety of chemical processes, spanning applications from gasoline production to additives for laundry detergent – not to mention thousands of other commercial and consumer products.

But despite their importance, the way zeolites actually grow is surprisingly not well understood, and methods to synthesize zeolites have been largely ad hoc. When selecting experimental techniques to characterize zeolite formation, researchers often fail to mimic the same conditions under which zeolites would naturally form, such as the ideal temperature or appropriate compositions. Moreover, because zeolites grow very slowly and at high temperatures, researchers have thus far been unable to use high-resolution imaging techniques to capture their growth in real time.

That is until now. Jeff Rimer, the Ernest J. and Barbara M. Henley Assistant Professor of chemical and biomolecular engineering with the University of Houston Cullen College of Engineering, has published an article in Science Magazine that outlines an in situ method for visualizing the growth of zeolites through the use of instrumentation that permits measurements to be performed at realistic synthesis conditions.

Typically, a powerful imaging tool called Atomic Force Microscopy (AFM) has been used as an ex situ technique to visualize the topography of zeolites after they have grown, from which inferences can be made regarding the mechanism of growth. However, AFM is traditionally used at or near room temperature, and zeolites typically grow at temperatures ranging from 80 to 100 degrees Celsius. Moreover, researchers could only image zeolites for very short periods of time using AFM because of lateral drift, or the tendency for the area being imaged to gradually shift out of the frame.

To bypass these two obstacles, Rimer teamed up with a company called Asylum Research to design a liquid cell that would allow them to use AFM to image zeolite surface growth at much higher temperatures. They also worked together to create a new software suite that accounts for lateral drift while using AFM to continuously image the surface of zeolite crystals. This so-called “drift correlation” software automatically accounts for lateral drift by shifting the view so the same surface area is being imaged every time, allowing researchers to scan zeolite surfaces for up to 48 hours.

Together, these two advancements in AFM technology from Rimer’s group will allow researchers to study zeolite growth in situ and to elucidate the pathways of crystallization for the first time ever. Now that we have a better understanding of the science underpinning zeolite growth, Rimer said he hopes that the zeolite industry will be able to more readily tailor zeolites for specific applications.

“It’s becoming more and more evident that if we can rationally design these materials – for example, selectively alter their size or shape – then we can enhance their properties and performance for different applications. I’m hoping the ability to conduct more detailed imaging of zeolite surface growth will lead to an improved fundamental understanding of the growth mechanism, which in turn can be used to develop more predictive synthesis methods to tailor the physical and chemical properties of zeolites,” Rimer explained.

Using the novel liquid cell and AFM imaging software, Rimer was able to conclusively answer what he calls a “25-year-old-question” about how zeolites form in his article. Researchers have been scratching their heads for over two decades over the role of tiny silica nanoparticles which are present during the entire process of zeolite growth. Until now, researchers have wondered exactly what role, if any, these silica particles play in the growth of zeolites. Some camps believe that these particles directly act as growth units in zeolite synthesis, while others believe these particles are simply supporting actors in the process which dissolve to form smaller species that participate in zeolite growth. According to Rimer, both of these camps are correct.

This allowed Rimer’s group to track the deposition of silica particles on the surface of the crystal, revealing a highly dynamic process in which silica nanoparticles attach to the surface and rearrange themselves into the underlying crystal. However, Rimer said that there is still much to be revealed about these particles. “We don’t quite understand their structure or how they evolve over time,” he said. But one thing is for sure: using the novel AFM instrumentation from Rimer’s group, researchers will now be able to study zeolite growth and the role silica nanoparticle precursors play in this process with a level of detail never before possible.

“The instrumentation we developed will play a significant role in future research on zeolite synthesis and will help to guide the study of related materials that form at higher temperatures,” Rimer said. “The more we uncover about the growth mechanisms of materials, the more we have the ability to predictably control these processes.”