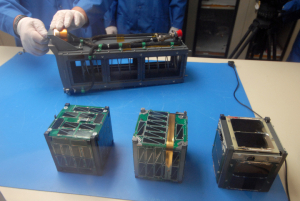 Thanks to electrical and computer engineering faculty members David Jackson and Ji Chen, the University of Houston will be among only 13 universities chosen by NASA to design and develop new small satellite technologies.

With seed funding provided by the Cullen College of Engineering, Jackson and Chen launched a research program at the college just last May to develop antennas for small satellites – called “cubesats.” Beginning this fall, Jackson and Chen will receive up to $200,000 from NASA over the next two years to continue their research.

Small satellites are generally classified as those that weigh less than 500 lbs. Compared to their larger counterparts, they are less expensive to build and to launch into orbit. These cost factors make it practical to operate multiple satellites in coordination, providing the benefit of redundancy: if one is damaged or malfunctions, others can pick up the slack.

Antennas remain one of the challenges to the use and reliability of small satellites, however. Most small satellites rely on antennas that are mechanically deployed after launch. These mechanical systems can easily become damaged during launch, Chen said, making the entire satellite essentially worthless.

Jackson and Chen, by way of their small satellites laboratory, are working to develop antennas that can be etched directly onto the solar cells that power these satellites.  “We don’t want any moving parts,” said Chen. “By etching an antenna on a solar cell, we can make it rigid. There’s no mechanical deployment.”

The actual etching isn’t a challenge, noted Chen. The real work comes in finding the right patterns to etch in order to facilitate reliable communication among small satellites and between an individual satellite and earth.

Jackson, Chen, and their student research team will be working side-by-side with engineers and scientists from NASA Johnson Space Center with the ultimate goal of transforming small spacecraft technologies.

"This collaboration will allow our faculty and students to benefit from the wealth of experience and knowledge that NASA personnel have in the areas of satellites, antennas, and communication systems," Jackson explained.

Moreover, Jackson noted that faculty and students working within the laboratory will have the opportunity to use the testing facilities at NASA JSC, "which will be instrumental in the final testing and space-qualification phases of the small satellites."

From the NASA press release: "We are excited about this new opportunity for NASA to work with university students, researchers and faculty in 13 different states to advance technology in the emerging field of small spacecraft," said Michael Gazarik, associate administrator for the Space Technology Mission Directorate at NASA Headquarters in Washington. "In addition to enhancing small spacecraft technology, these teams will help strengthen our nation's high-tech workforce."