UH Research Featured in The New Yorker
May 7, 2013
By
Toby Weber 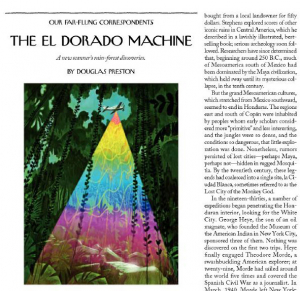 A feature article in the May 6 issue of The New Yorker outlines how a research collaboration based at the University of Houston Cullen College of Engineering found previously undiscovered ruins in the rainforests of Honduras.

The article, titled the “El Dorado Machine,” outlines the work of the National Center for Airborne Laser Mapping (NCALM), based at UH operated in partnership with the University of California, Berkeley. Led by director and principle investigator Ramesh Shrestha, Hugh Roy and Lillie Cranz Cullen Distinguished Professor of civil and environmental engineering, NCALM specializes in the creation of extremely precise maps using LiDAR (light detection and ranging) technology. To create a map, researchers fly over an area shooting up to hundreds of thousands of bursts of light per second at the ground. How quickly that light returns to the aircraft can be used to reveal topographical information.

In 2012, the group was approached by documentary filmmaker Steve Elkins, who was working on film on Honduras’ legendary lost city of Ciudad Blanca. NCALM agreed to map 50 square miles of unexplored Honduran rainforest as part of the project.

With just a few days of mapping, the group uncovered multiple previously undiscovered archeological sites, including what appear to be cities with pyramids, plazas and terraces; farming areas and canals; and roads connecting different population centers. While researchers must visit the actual sites for further exploration and confirmation, together they indicate that a far larger and more complex pre-Columbian society existed in these rainforests than previously thought.

Though some in the archeological community have expressed skepticism about the findings, others see LiDAR as a game changing technology. According to the article by Douglas Preston:

The archeological community is excited. When Chris Begley, the specialist in Honduran archeology, saw some of the LiDAR images, he expressed astonishment. “With LiDAR, you can find archeological sites that you never could before,” he told me “There is incredibly valuable information in those images.” Alicia Gonzalez, a Mesoamerican specialist and a former senior curator at the Smithsonian’s National Museum of the American Indian, reviewed the images and told me, “I couldn’t believe it. It was so fabulous. LiDAR is going to turn the face of research all the way around. With LiDAR, you can do a hundred years of survey work in a few days.”

The New Yorker article, available to magazine subscribers, can be found here. The 2012 press release from University of Houston on the discovery can be read here, and the Parameters feature package on NCALM, including the group’s work in Honduras, can be found here.