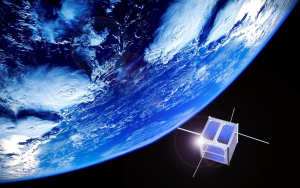 Thanks to seed funding provided by the Cullen College of Engineering, electrical and computer engineering faculty members Ji Chen and David Jackson have launched a research program to develop antennas for small satellites.

Small satellites are generally classified as those that weigh less than 500 lbs. Compared to their larger counterparts, they are less expensive to build and to launch into orbit. These cost factors make it practical to operate multiple satellites in coordination, providing the benefit of redundancy: if one is damaged or malfunctions, others can pick up the slack.

Antennas remain one of the challenges to the use and reliability of small satellites, however. Most small satellites rely on antennas that are mechanically deployed after launch. These mechanical systems can easily become damaged during launch, Chen said, making the entire satellite essentially worthless.

Chen and Jackson, then, are working to develop antennas that can be etched directly onto the solar cells that power these satellites.  “We don’t want any moving parts,” said Chen. “By etching an antenna on a solar cell, we can make it rigid. There’s no mechanical deployment.”

The actual etching isn’t a challenge, noted Chen. The real work comes in finding the right patterns to etch in order to facilitate reliable communication among small satellites and between an individual satellite and earth.

Supported by data gathered through the college’s seed funding, Chen and Jackson are currently assembling proposals for external support.

Chen, in fact, represents UH in an National Science Foundation-funded center that also includes Clemson University and Missouri University of Science and Technology. The group, which has received about $1 million from the NSF during the past five years, develops solutions to EMC-related challenges and produces reports on the electromagnetic properties of various products and devices. Companies that provide the group with financial support include electronics device makers like Apple and Huawei, as well as medical device manufacturers like Cyberonics, Biotronik and St. Jude’s Medical.