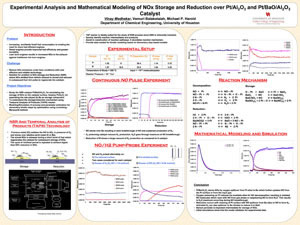 A postdoctoral research fellow with the University of Houston Cullen College of Engineering took first place in the poster presentation competition at the Southwest Catalysis Society’s Spring Symposium, held this spring at Rice University.

Vinay Medhekar’s winning poster and presentation chronicled his research efforts to reduce NOx emissions of lean-burning engines. NOx emissions are a class of pollutants consisting of nitrogen and oxygen that includes nitrous oxide and nitrogen dioxide.

“Currently, gasoline engines run in rich mode, which means there is a high gasoline-to-air ratio,” said Medhekar. “What happens is that the extra fuel is used by a catalytic converter to reduce NOx emissions. The cost of fuel is going up, though, so you want to increase fuel efficiency.”

Lean-burn fuel engines, on the other hand, have a lower gas-to-oxygen ratio, making them more fuel efficient. This smaller ratio, however, prevents catalytic converters from effectively reducing NOx. As a result they typically emit a greater amount of NOx into the air than rich-burning engines.

Environmental concerns, combined with an FDA mandate to reduce NOx emissions from lean-burning engines by 90% over the next few years, are spurring research into cutting these emissions.

Medhekar’s research, which is being led by Michael Harold, professor and chair of the college’s chemical engineering department, and Vemuri Balakotaiah, John and Rebecca Moores Professor of Chemical Engineering, seeks to achieve this through a NOx Storage and Reduction (NSR) catalyst. Though such a component does require fuel in order to operate, it needs much less than rich-burn engines.

Currently, this catalyst is constructed of precious metals such as platinum and alkali earth metals such as barium. Including such a catalyst in an automobile, however, could drive up a vehicle’s price by hundreds of dollars or more, said Medhekar.

Medhekar, then, is studying exactly how the catalytic reaction achieved by the NSR catalyst takes place. In doing so, he hopes to calculate the minimum amounts of platinum and barium that are necessary to effectively reduce NOx emissions, or to uncover less-expensive materials that can be used in their place.

“Can we understand the chemistry in such a way that we can reduce the amount of catalyst and fuel used in this process? Also how important are the interactions between various metals to improve the efficiency of the NSR catalyst as a whole? That’s what we’re trying to find out,” said Medhekar.