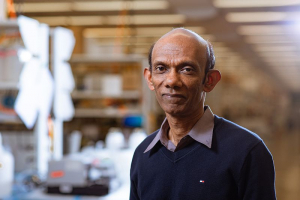 “The unique aspect of both research reports is that we are looking at stool samples comprehensively, and not just at one or two favorite molecules,” said Chandra Mohan, Ph.D., Hugh Roy and Lillie Cranz Cullen Endowed Professor of biomedical engineering in the UH Cullen College of Engineering. “We are casting a wide net, and this has never been done before.”

With colon cancer, typical fecal blood tests look for hemoglobin in stool samples. In Mohan’s work, hemoglobin is just one of more than a thousand proteins being hunted.

“By the time you see blood, it might be too late, and there are other proteins that appear in the stool if someone has colon cancer, and they may appear much earlier than when the blood appears,” reports Mohan in Nature Communications.

Aptamers are pieces of DNA that can be selected to bind to other molecules. They serve as bait, carefully selected for each protein they will try to detect. If the protein is present in the stool, it will bind to the aptamer in the library. If the protein is not present, it will be washed away.

“Longitudinal studies are warranted to assess the clinical utility of these novel biomarkers in early diagnosis of colorectal cancer,” said Mohan.

Predicting the Future with Markers for IBD

In the Journal of Gastroenterology, Mohan is reporting similar findings in early diagnosis of ulcerative colitis and Crohn's disease, finding several proteins elevated in pediatric patients with the disease after screening for 1300 proteins. Those proteins are stool Ferritin, Fibrinogen, Haptoglobin, Hemoglobin, Lipocalin-2, MMP-12, MMP-9, Myeloperoxidase, PGRP-S, Properdin, Resistin, Serpin A4, and TIMP-1, all significantly elevated in both ulcerative colitis and Crohn’s disease.

The team took samples from patients at four different time periods, allowing the researchers a rare window into disease progression.

The IBD study represents the first use of the aptamer-based screen of stool samples in IBD, representing the largest-ever targeted stool proteomic study in IBD.

Mohan’s hope is to replace the invasive endoscopy test by finding stool markers that can predict what is happening in the intestine without having to do endoscopy. Stool test for proteins can be done at home and through the mail.